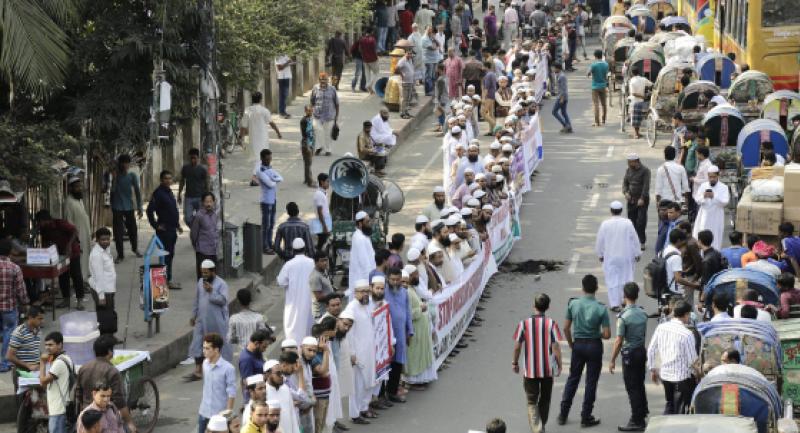 DHAKA - Hundreds of Rohingya have arrived in Bangladesh after fleeing violence in neighbouring Myanmar, community leaders said Tuesday, but border guards have pushed back hundreds more despite a United Nations plea to let them in.

The UN says up to 30,000 Rohingya have been displaced by violence in Myanmar's Rakhine state, where dozens of people have been killed in clashes with the military, and has urged Dhaka to open its border to them.
Instead the Bangladesh government, under pressure from local communities to limit the number of migrants, has intensified patrols along the 237-kilometre (147-mile) border to prevent a large-scale influx.
But Rohingya leaders told AFP an estimated 1,000 have still managed to get in over the last week.
Most are hiding out in camps for the 32,000 legal refugees already living in southeast Bangladesh, fearing repatriation if they are found by the authorities.
Among them is Mohammad Amin, 17, who said he and 15 others people fled their homes in Rakhine five days ago and reached Bangladesh by swimming across the Naf river that divides the two countries.
"The (Myanmar) army killed my father and elder brother. I hid on a hill and then walked and swam across the river, and took refuge at a mosque (in Bangladesh)," he told AFP by phone from Cox's Bazar near the border.
"I don't know what happened to my mother and sister."
State media reports in Myanmar say security forces have killed almost 70 people and arrested some 400 since the lockdown began six weeks ago, but activists say the number could be far higher.
Myanmar troops have poured into a strip of land that is home to the stateless Muslim Rohingya minority since a series of attacks on police border posts last month.
Witnesses and activists have reported troops killing Rohingya, raping women and looting and burning their houses.
Commanders of the Border Guard Bangladesh said their troops had blocked nearly 300 Rohingya from crossing the border overnight, the highest number since the crisis began last month.
"We're preventing them on the zero line, especially those who were trying to cross the barbed-wire fences erected by Myanmar," said Imran Ullah Sarker.
He said many were sent back after they managed to sneak across unmanned parts of the border.
Bangladesh is also patrolling the Naf river, the commanders said.
"They told us that their houses were torched and they came here seeking safe shelter," said one border guard official.