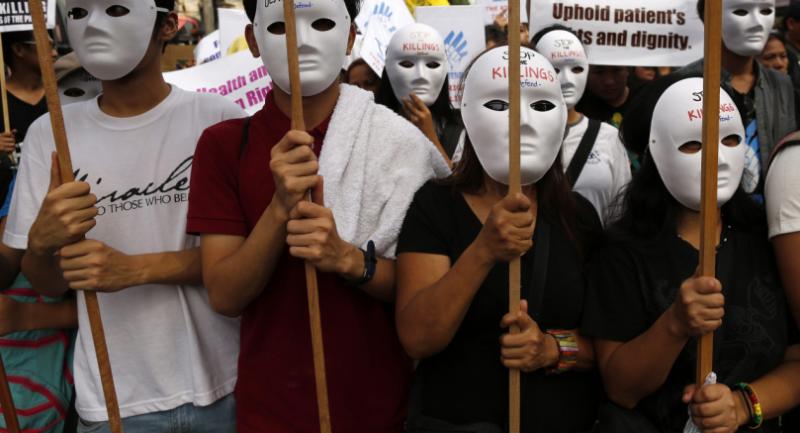 Hundreds of Filipino protesters on Saturday marched through the streets of Manila in protest against the president's drug war that has claimed the lives of almost 6,000 people.

The activists rallied to commemorate International Human Rights Day and called on Rodrigo Duterte to put a stop to the human rights violations allegedly committed during police and military anti-drugs operations.

Some protesters, many wearing masks, held placards spelling out 'Stop Killings' as they marched through Metro Manila, close to the presidential palace, an EPA journalist reports.

Activists also laid a dummy out on the road, wrapped in duct tape and with its hands bound behind its back, in imitation of the alleged drug dealers found in similar positions after they were shot dead in the streets during the crackdown.

The rally on Saturday was one of a number of protests held in some provinces, including General Santos City in South Cotabato, southern Philippines, according to ABS-CBN News.

Other events are taking place around the world to mark Human Rights Day, which has been celebrated annually on Dec. 10 since the United Nations General Assembly adopted the Universal Declaration of Human Rights in 1948.

At least 5,900 people have died in police operations or at the hands of vigilante groups in the Philippines since Duterte launched his anti-drug campaign after assuming power on June 30 this year. Despite the ongoing violence, the president continues to enjoy much popularity in the country. A survey conducted in October, after Duterte had completed his first three months in office, showed that 80 percent of Filipinos trusted him.