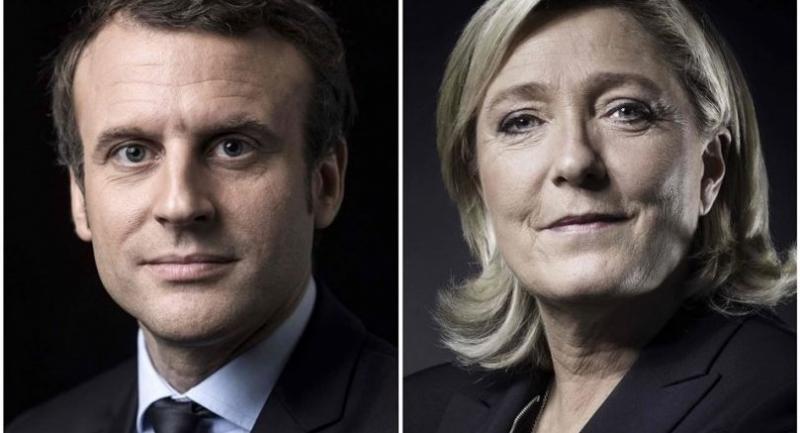 Polar opposites: The issues that divide Le Pen and Macron

Here is where they stand on the key questions:

Le Pen wants to drop the euro single currency for daily use and bring back the franc. She also wants to take France out of Schengen, Europe's visa-free travel zone.

She says she will hold six months of negotiations on returning powers from Brussels to national capitals after which she will hold a referendum on France's membership of the EU.

She also opposes the CETA trade deal between the EU and Canada.

Macron, a former banker and economy minister, has run an unabashedly pro-European campaign. He wants to bolster the eurozone by setting up a separate budget for the 19 countries that use the common currency.

He also proposes giving the zone its own parliament and finance minister.

Macron also wants Europe to strengthen its external frontiers by setting up a common border force, pool more of its defence forces and impose higher tariffs to protect European industry from unfair competition, particularly from China.

Le Pen has vowed to immediately impose a "moratorium" on long-term immigration. She wants to reduce net migration -- the difference between the number of people arriving and leaving -- to 10,000 and bar illegal immigrants from gaining residency.

She would also make it harder to seek asylum and curtail policies that let migrants bring relatives to France.

Foreigners convicted on terror charges or any other crime would be automatically deported, and she would make it harder for children born in France to migrant parents to gain French citizenship.

She would also toughen laws on conspicuous religious symbols, extending a ban on Muslim head scarves, Christian crosses, Jewish skullcaps and other symbols to all public places. She would also ban the Islamic burkini swimsuit.

Macron has ruled out tougher laws on religious garb. He has championed diversity and vowed to give tax breaks to companies that hire young people from tough predominantly immigrant neighbourhoods.

He has also pledged to speed up processing asylum requests and praised German Chancellor Angela Merkel's for allowing over a million migrants from the Middle East and Africa into Germany in the past two years.

Both candidates have said they would keep France's official 35-hour work week, but Macron, a liberal, has promised to give bosses more freedom to negotiate working time directly with staff at the company level.

Le Pen wants to lower the retirement age to 60 from 62, currently the minimum age for most people. Macron wants to unify a complex web of retirement rules for various public and private-sector employees while maintaining the current retirement age.

He also wants to give the self-employed access to unemployment benefits but suspend benefits for qualified workers who refuse two "decent" job offers.

Le Pen wants fewer civil servants at the regional level but has said she would hire 21,000 more police and border officials.

Le Pen would impose a 35-percent tax on goods from companies that move production outside France and slap a new tax on groups that hire foreign workers.

She would cut income taxes by 10 percent for the lowest-earning households.

Macron wants a three-year suspension of residents' taxes for 80 percent of French households.

Le Pen has said she would leave the wealth tax untouched.

Macron has pledged to cut France's reliance on nuclear energy to 50 percent of its total electricity needs by 2025, from about 75 percent now.

Le Pen has been a staunch defender of nuclear power and would halt France's efforts to develop wind power.

In education, Le Pen would impose a uniform for all public school students and roll back a controversial reform meant to make French school days shorter.

Macron wants to give schools more autonomy in terms of hiring and cut primary school class sizes in half in low-achieving and poor areas.

He would also ban the use of cellphones in elementary schools.

Le Pen wants to scrap a 2013 gay marriage law and replace it with a new form of civil partnership. She would also restrict medically-assisted procreation to heterosexual couples unable to have children naturally. Macron wants lesbian couples to also have access to fertility treatment.