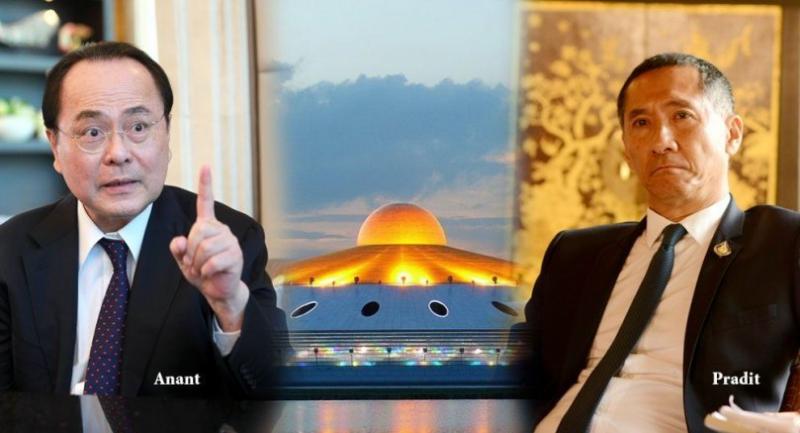 BUSINESS TYCOON and former politician Pradit Phataraprasit has denied any involvement in connection with the Dhammakaya Temple, even though he admitted to having bought two plots of land related to the scandal-hit temple.

One plot was purchased from property tycoon Anant Asavabhokhin, chairman of Land and Houses, for Bt492 million in 2011, while another was sold by Klongchan Credit Union Cooperative (KCUC). Both plots are located in the Klong Luang district of Pathum Thani province, near the temple compound.
Regarding the first plot of 46 rai, Pradit said he had records of three cheques showing payment made directly to Anant, while the ownership transfer of the other plot of about 40 rai was completed just two to three months ago due to earlier legal challenges.
Pradit said both plots were purchased at an average price of Bt10 million per rai, or around Bt1 billion in total, with the objective of expanding his family’s Talad Thai market business in Pathum Thani province.
“I bought the land plot (from Anant) at Bt492 million in 2011 for a business reason,” he said. “I don’t know what he has done with the money from that sale.”
According to the Department of Special Investigation (DSI), Supachai Srisupa-aksorn, a former chairman of the KCUC, illegally diverted Bt275 million from the savings cooperative to acquire M-Home SPV 2 Co, whose assets included three land plots in the Klong Luang district of Pathum Thani province.
One of the plots, measuring about 46 rai, was sold under a contract in 2011 to Anant for Bt93.7 million, far below the official appraised price of Bt281 million.
Anant later sold this plot to Pradit, then allegedly donated Bt303 million to Dhammakaya Temple’s Khun Yay Maha Ratana Upasika Chandra Khonnokyoong Foundation. Supachai is now serving a jail term for embezzling money from the KCUC.
“If the DSI wants to summon me, I am ready. I also bought land plots in the nearby area in 2015 to prevent rivals from expanding business to compete against Talad Thai,” said Pradit, who is a former secretary-general of the Democrat Party.
Regarding the other plot, ownership was transferred recently and the payment made directly to the KCUC, but the transaction had nothing to do with Dhammakaya Temple, he said.
Pradit said identity of the former owner of M-Home SPV 2 Co was not known, but he or she was a major landlord in Pathum Thani and owned the site where Talad Thai, a 400-rai open market for fresh food wholesalers, is currently situated. Pradit said he wanted to buy M-Home SPV2’s adjacent plots of land.
Meanwhile, deputy national police chief Srivara Ransibrahmanakul yesterday met with Department of Special Investigation chief Pol Colonel Paisit Wongmuang to discuss progress on Dhammakaya cases, including Pradit’s alleged involvement.