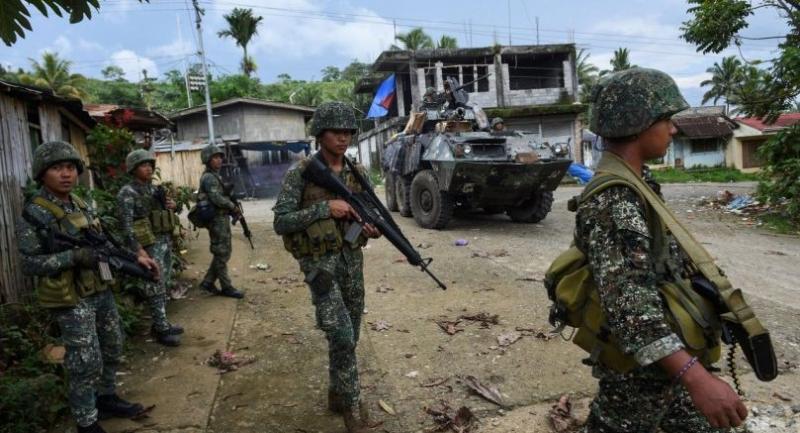 MARAWI, Philippines - Dozens of people ran to freedom through a terrifying gauntlet of military air strikes and Islamist gunmen Saturday, nearly two weeks after being trapped in a deadly battle for a Philippine city.

The group of 38 said they ran from their hiding place in a part of Marawi city controlled by self-styled Islamic State group gunmen as soldiers seized a key bridge in the area to give the civilians safe passage.

"We lay on the floor in the dark each night whenever we heard gunshots or explosions. We barricaded the doors with furniture and a refrigerator," high school teacher Jerona Sedrome, 27, told AFP.

"The ISIS tried to force their way into the house and got in at the second attempt, so we hid in a tunnel beneath the house," she added, using the acronym for an alternative name for IS.

Hundreds of gunmen rampaged through the city of 200,000, the Islamic capital of the mainly Catholic Philippines, on May 23 after government forces attempted to arrest their leader, Isnilon Hapilon.

Up to 50 gunmen continued to control downtown Marawi nearly two weeks later with at least 15 hostages including a Catholic priest, with some being used as human shields, the military said.

As many as 2,000 people also remained trapped in desperate conditions in these areas, the government said, likely without food and water and with some injured or ailing as security forces mount a relentless assault.

The military has said it is firing artillery and rockets from the air, as well as dropping conventional bombs, as ground forces in armoured vehicles fight their way in dodging sniper fire, improvised explosives and anti-tank rockets.

At least 70 people were rescued Saturday as intense fighting continued, including 23 teachers from Dansalan College, who were with a year-old baby, seven other children, and seven other adults.

The gunmen set alight the college on the first day of the fighting, and the teachers said bombs and fires also destroyed many of the houses around the house where they hid.

Dansalan college is run by the Jesuit order of the Catholic Church, and all the teachers were Christians.

The teachers recounted to AFP between tears and gulps of coffee and bottled water how they survived on steamed rice and rainwater.

"If it didn't rain we had no water and we didn't eat," said Sedrome's younger sister and fellow teacher, Jane Rose Sedrome, 25.

The elder sister said they secretly communicated with government rescuers by mobile phone text messages through their ordeal, and made their break for freedom when informed the gunmen had been driven away from the bridge.

But they had to go through the sniper alley of Bangolo, the city's old quarter which is one of the targets of the day and night air strikes.

"We knew they were ISIS because they wore black clothing and black head masks."

Arnold Balo, 28, an ice cream factory worker, said he cradled a boy in one hand and carried a half-metre long machete in the other, their only protection from the gunmen.

At one point during their sprint for freedom, a gunman perched near the top of a building aimed a sniper rifle at him and ordered him to put his weapon on the ground, Balo said.

"I will do as you order sir. Please don't kill us," he said he told the gunman. Balo said he put the machete, and the militant allowed the group to pass.