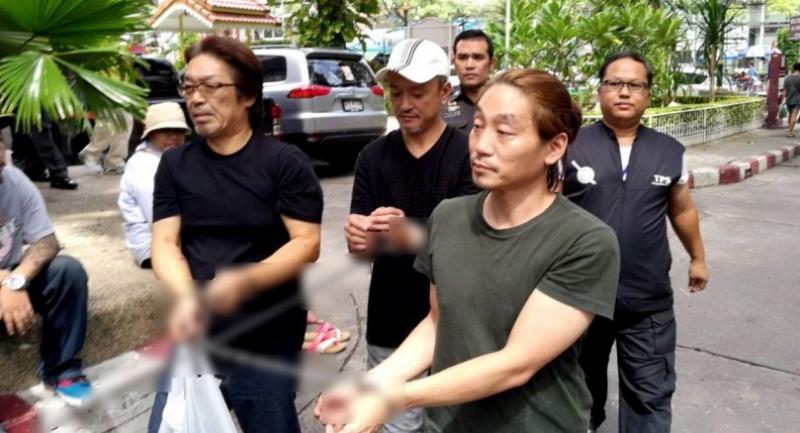 POLICE have looked into phone records of three Japanese men alleged to have abducted and tortured a countryman and found they had talked about demanding a ransom of 20 million yen (Bt6 million) with an alleged mastermind in a foreign country, a police source said on Monday.

The source said records revealed that the three had tailed Japanese businessman Tsunemi Watanabe for months before kidnapping him.
A timely police raid on an apartment in Ekkamai Soi 23 in Watthana district on Friday night appeared to have saved Watanabe’s life, as he was found with his right leg broken and bruises from being tortured. He was tied up with power cables to a bed inside a room.
His alleged captors who were arrested were identified as Kobari Masato, Reo Tsuruzoe and Miyata Kiyoto.
The police said Kobari has a big tattoo on his back and the little finger on his left hand cut off – a common practice by the notorious Yakuza criminal networks in Japan.
Police learned about the kidnap after Watanabe’s Thai wife alerted police last week that the businessman had gone missing and may have been abducted by a Japanese construction contractor with whom he has had a long-running feud.
A police investigation linked the suspected abductors to a white Toyota Vios car, which was seen at a store near Sukhumvit Soi 26. Police then traced the car and managed to rescue the Japanese businessman.
Police have said they believed that had the rescue operation been delayed, Watanabe would have been killed as his captors had already brought a saw, duct tape, black garbage bags and a large plastic sheet to the room. The three Japanese so far have been charged with robbery, detaining a person against his will and assault.
The three applied for bail but that was opposed by police, who said the men were foreigners and if granted bail they could flee or threaten witnesses.
Police will wait for Watanabe to recover before talking to him to try to get more information.