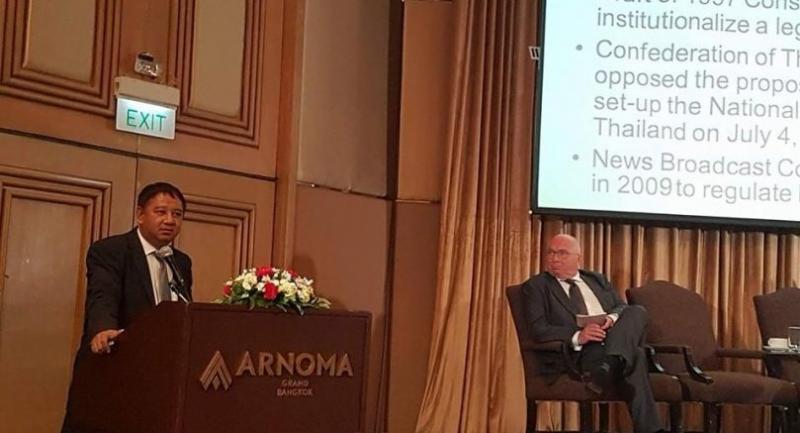 Thai media is standing up to the challenges to press freedom, including the media regulatory bill, by undertaking reforms and improving self regulation.

Speaking at an international seminar marking the 20th anniversary of the Thai National Press Council (NPC), the council’s chairman and veteran journalist Chavarong Limpattamapanee identified the challenges facing the country. He said there was a lack of public trust and low cooperation among professionals as well as the pressing issue of the media regulatory bill, which is being imposed by the junta-appointed reform council.
Although self-regulation has been around for decades, the NPC chairman admitted that it still has room for improvement. The public does not trust the media to take complaints seriously and seldom gives official feedback to the media.
While press councils from Sweden, Australia and Myanmar, whose representatives also appeared at the seminar, received hundreds of complaints from the public every year, the Thai council received only 10 to 20.
“The public does not trust that we would handle the case quickly or that we will be able to satisfy them.” Chavarong said. “Rather, they take to social media like Facebook or Twitter. You can find the complaints everywhere and every day but they never want to complain officially to us.”
To tackle the issue, Chavarong said the council was currently working to open channels with the public such as a mobile application to give better access to media organisations to lodge complaints.
The council also has an ethics committee which Chavarong said would take an active role in raising or picking up complaints from the public and follow issues through.
Self-regulation has also been improved with an amendment to its charter last year that called for every newspaper to set up an internal ombudsman tasked with ensuring the outlets follow the professional codes and conduct, he said.
However, the practice has not yet met with success, as some companies did not take it seriously and would not support the ombudsman.
Despite the struggle and low cooperation among the media, the NPC chairman strongly supported self-regulation and opposed legal powers of control proposed by the junta-backed media regulatory bill.
“If there is to be legal power, the question is who will exercise it?” he said. “It is open to interference. When power is involved, people would struggle to be part of it. There is no guaranteed that once [the media is regulated by legal power] it would be free from political influence.”
He said that even though it was prescribed that those exercising power must be a media professionals, the same problem could occur.
“There are hundreds of media organisations in this country. And we do not know how many of them are genuine professionals.” Chavarong said.
He said that national media organisations had discussed the issue with a government representative who promised to review the draft bill and ensure media participation in the drafting process.
Chavarong said he was confident there would be a compromise on the media control issue and self-regulation would be maintained in the end. Media organisations were working very hard to protect press freedom, the NPC chairman said.