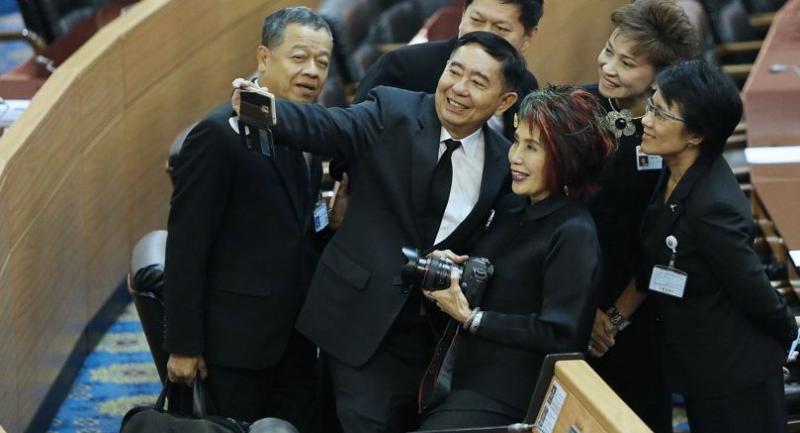 Process of reform ‘essential’ in itself

REDUNDANT, outdated, intangible, or even controversy provoking – are all criticisms recently raised against the National Reform Steering Assembly (NRSA), which was set up nearly two years ago to pursue the work of the defunct National Reform Council (NRC).

But the worldly educator and reformer Wiwat Salayakamthorn just wishes that people would look at the whole process of reform, not just the NRSA, when judging what has been achieved since the coup.
“What people have said, somehow, they have just never done it [achieved reform],” said Wiwat, a member of both the NRC and the NRSA who has closely followed how reform work has taken shape and been pursued in a historical context.
The country has been through such a process before – during the reign of King Rama V and during the civil-based political optimism of 1997. In 1997, many reformers saw the new constitution as addressing civil-based politics as well as creating a new political relationship among concerned parties for the first time since the politically turbulent era of the late 1970s.
This, they viewed, gave hope that the country would be reformed for the better with a higher proportion of power in the people’s hands. However, it failed, partly because new political relationship did not change as they wished, as the bureaucracy still remained too strong and new legal mechanisms were not put in place as hoped.
More critical was the fact that the new system was corrupt with new political capitalists – as noted by Suriyasai, a former co-leader of the now-defunct People’s Alliance for Democracy, and the former People’s Reform Democratic Committee (PDRC), which called for “reform before an election”.
New political conflict emerged and continued until the military eventually staged a coup on May 22, 2014, when the fresh round of reform became highly charged because the military addressed the issue as part of its reasons for staging the coup.
After the military took control of the country for two months, reform was officially addressed in the interim charter’s Article 19 as part of the junta’s three prime duties. The other two were administering the country and promoting reconciliation and unity among the people.
Reform was also addressed in Article 27, which established the NRC to hatch 11 reform agendas and eventually nurture them into the country’s reform blueprint.
The NRC was dissolved following the voting-down of the first charter draft, and the council then submitted its reform blueprints to its successor, the National Reform Steering Assembly (NRSA), which was appointed in October 2015 to steer the NRC’s work into action.
Wiwat said reform is about pushing the country’s “whole structure”, and that means it needs to be carried on delicately with calmness and maturity. It cannot be finished in a short period of time.
Against all odds, he said, the country is at a juncture where it cannot avoid change. What remains more essential than the means, is the goal. And, in Wiwat’s view, the reformers have at least set the right goals for the country: prosperity, self-sufficiency, and sustainability.
“All these have been addressed, firm and clear, in the new charter, and we attempted to push them through until we succeeded,” said Wiwat, who requested the addition of the word “self-sufficiency” in the charter.
NRSA vice chairman Alongkorn Poonlaboot, explained to The Nation that the NRSA’s job was to carry on the work from the NRC by pushing forward its blueprint into an action plan.
So it came up with numerous implementation plans, including new regulations to implement its agendas. The 37 agendas have been expanded to 190 proposals, as of July 27, outnumbering the original blueprints.
Alongkorn said almost 70 per cent of the NRSA’s proposals mainly focus on “fixing” what is broken, with 20 per cent focused on building up existing strengths, and 10 per cent centred on creating something new.
He defended the whole reform process, in that it had come up with clear structures and procedures plus supportive administrative mechanisms, including the tripartite whips of the government, and the National Legislative Assembly, to push forward the NRSA’s proposals.
So far, at least 176 proposals have been acknowledged by Prime Minister Prayut Chan-o-cha.
But what makes Alongkorn assured about the success of the reform process is the fact that it has been addressed in the supreme charter draft as one main chapter. This will help guarantee its continuity and sustainability, and it will be linked to other necessary elements such as the 20-year national strategic plan.
“It’s the work that has never been done before. It has come up with a clear goal, supportive mechanisms, plus assertive procedures that will be continued and sustained,” said Alongkorn, acknowledging criticism that has arisen against the body.
Suriyasai, who shared the recent panel to review the body’s work, agreed that to assess the success of the reform work, it cannot be separated, as all the bodies and procedures are related to one another.
However, Suriyasai gave weight to people’s participation as he has always insisted, and warned about increasing distrust among the state, politicians and citizens, which has prompted the ongoing reform work to lean towards bureaucratic strengthening.
“It would be a pity if the people’s push for reform is left as a waste. Reform is, in fact, the other side of the coin – with reconciliation – that we need,” said Suriyasai, urging political parties ahead of the coming election to compete for reform space and share with the people.
Wiwat agreed, saying; "Reform is for everyone, and people should have a chance to participate to help ensure accountability and sustainability."