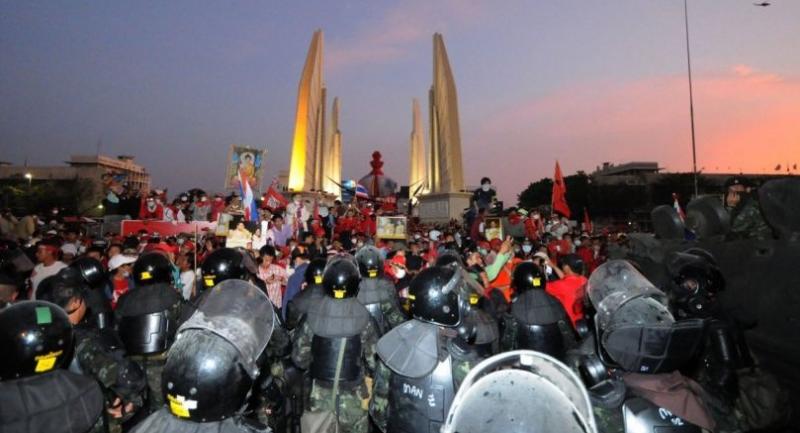 Relatives of the victims killed in the 2010 crackdown have planned a symbolic activity tonight at Ratchaprasong Intersection to communicate to their spirits about the court decision on Thursday.

The activity is to be led by Phayaw Akkahad, mother of victim Kamolkate Akkahad, who was a volunteer nurse killed in the crackdown. Phayaw has been active in calling for justice for all the victims.
She said in a Facebook posting after the case against Abhisit and Suthep was dismissed that everyone would continue fighting until they got justice.
The Supreme Court on Thursday upheld lower court decisions to dismiss lawsuits against former prime minister Abhisit Vejjajiva and his deputy Suthep Thaugsuban related to the military crackdown on the 2010 red-shirt protest in Bangkok.

The Supreme Court upheld decisions of the Criminal Court and Appeals Court that the Department of Special Investigation had no authority to initiate an investigation against the two officials or to file suit against them.
The court said that, since Abhist and Suthep ordered the crackdown in their capacities as top-ranking ministers, the investigation would have had to be initiated by the National Anti-Corruption Commission.
The DSI had the attorney general file the lawsuit, accusing them of murder, attempted murder and premeditated murder stemming from the order for the military and police to crack down on anti-government protesters on May 15, 2010.
On June 10, 2014, Abhisit and Suthep responded by asking the Criminal Court to consider whether the DSI had the authority to initiate legal action against them.
That court ruled on August 28 they did not and rejected the lawsuit.