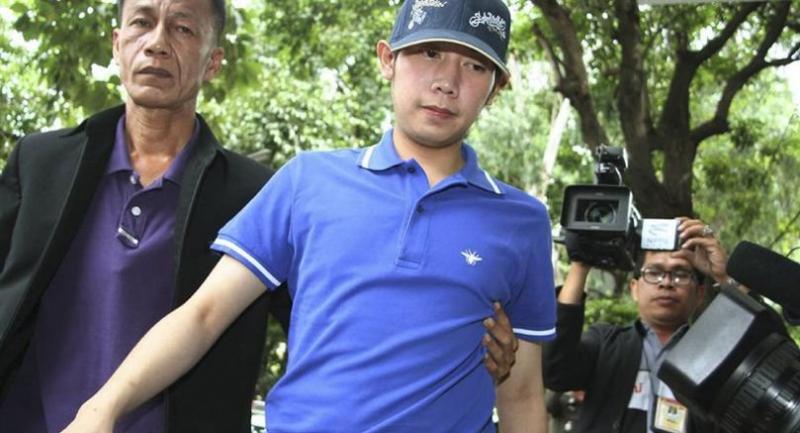 Fugitive billionaire now liable for only one count in connection with 2012 crash.

ANOTHER OF the criminal charges against Worayuth Yoovidhaya, the fugitive Red Bull billionaire heir who is wanted over a 2012 fatal hit-and-run accident that killed a policeman, expired yesterday, leaving just one valid charge against him.
After five years, a charge against Worayuth for fleeing the scene following a fatal accident joins two other charges that have expired due to the statute of limitations. He is now liable only to face court on a charge of reckless driving leading to death.

File photo in 2012
Over the past years, there has been severe criticism of authorities’ inability to bring the 32-year-old to justice, with both police and prosecutors facing their share of responsibility.
However, public prosecutors said yesterday that they remained committed to seeking Worayuth’s extradition back to Thailand to face trial at least on the fatal reckless driving charge. The statute of limitations on that charge will not expire until 2027.
Worayuth, better known as “Boss”, is a grandson of Chaleo Yoovidhya, founder of the multi-billion-baht Red Bull energy drink business empire. It is alleged that, in 2012, he drunkenly drove his Ferrari into Senior Sergeant Major Vichien Klanprasert, killing the motorcycle policeman at the scene near Bangkok’s Sukhumvit Road.
Even though Worayuth has been on Interpol’s “Red Notice” for arrest in 190 countries around the world, authorities have been unable to detain him so far. He was last seen in Taiwan where local police were alerted, but no arrest was made.

File photo in 2012
Somneuk Siengkong, spokesman for the Office of Attorney-General, said the most serious charge of reckless driving leading to death remains legally valid for prosecution, and authorities would continue to pursue the case for Worayuth’s extradition to Thailand.
The Attorney-General’s over-seas affairs unit is responsible for this matter, according to Somneuk, but there had not been any progress in establishing Worayuth’s current whereabouts. Somneuk said Thai authorities could seek cooperation from other Interpol member countries if there is specific information about the suspect’s whereabouts.
In addition, the Ministry of Foreign Affairs can work with its counterparts in other countries to facilitate Thailand’s request for Worayuth’s arrest.
According to the Criminal Code, reckless driving that leads to death is punishable with a jail term of up to 10 years and a fine of up to Bt20,000. Its statute of limitations period is 15 years.
Pol Colonel Krissana Pattanacharern, deputy spokesman for Royal Thai Police, said police had turned to every channel to get Worayuth arrested, but there has been no update on his whereabouts.
Krissana also dismissed allegations that Thai police had helped the billionaire suspect evade arrest, adding that if anyone had evidence to substantiate such an allegation, they should come forward.
Meanwhile, Porn-anan Klanprasert, the elder brother of Vichien, said he was sad that police could not speed up their efforts to bring the suspect to justice. “It’s already five years but the case is not going ahead. I am asking for justice for my brother,” he said.
There have been severe criticisms regarding the case, with allegations that Worayuth had enjoyed “the privileges of the rich” to evade the justice system with the help of law-enforcement authorities, including police.
According to Thai law, both the Justice and Foreign Affairs ministries are in charge of seeking the extradition of suspects who flee to other countries.