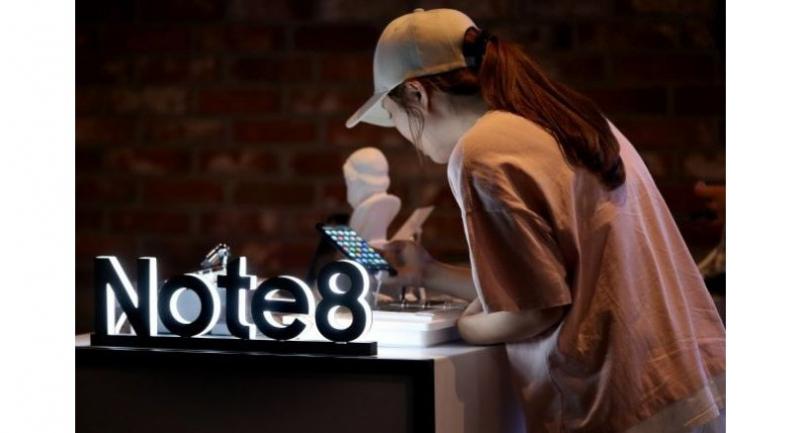 Samsung Electronics’ Galaxy Note 8 is expected to be priced higher than 1 million won ($892) in South Korea for the first time among the company’s premium phones.

Analysts predicted the prices of premium smartphones would continue to soar as handset makers competitively add advanced specifications to their devices and the industry enters a super cycle.

Samsung’s mobile chief Koh Dong-jin recently changed his earlier estimation, saying, “The price of the Note 8 is likely to surpass 1 million won although we are in final discussions with telecom operators about the pricing details,” during a press conference held at the ongoing consumer electronics show IFA in Berlin.

He had said last month that he “doesn’t want to see the price starting with the number one,” during a Note 8 event in New York.

With a few days to go before preorders begin here, speculations have emerged that the price of the Note 8 will surpass 1 million won. It has a newly adopted dual camera and similar specifications to the Galaxy S8 unveiled in the first half, which cost 935,000 won. Its predecessor Note 7 was 988,900 won.

According to a report survey released by SamMobile, an online community for Samsung product fans, 77 percent of 1,809 people said they are not happy with the price of the Note 8, as, “it is too high.” Another 14 percent said they did not mind paying that price and 9 percent said they could not decide at this point.

Apple’s upcoming iPhone 8, a rival of the Note 8, is also predicted to see its price jump this year to around $1,000 with the adoption of new features such as an augmented reality sensor and dual camera. The price of its predecessor iPhone 7 started from $649.

IHS Markit said the trend of price increases for premium smartphone models would continue as handset makers continue to look for design differentiation at the upper tier of the product category.

“Smartphone makers are still taking a risk because they are yet to confirm whether there is enough price elasticity in the market for these premium smartphone designs. If there is not, consumers will either choose cheaper smartphone models or hold off on smartphone purchases,” said Wayne Lam, principal analyst of mobile devices and networks for IHS Markit.