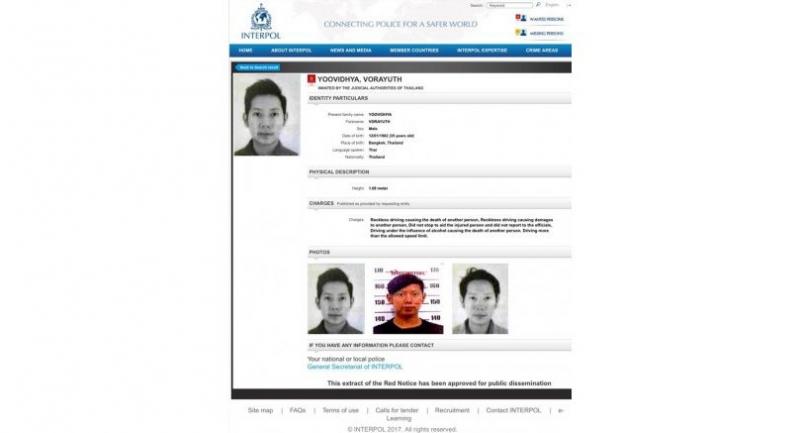 The International Police Organisation (Interpol) has included on its wanted list the fugitive heir to the Red Bull energy drink fortune who has been charged over a fatal car crash that killed a Bangkok policeman five years ago.

Interpol issued the “red notice” for Vorayuth Yoovidhya and made it viewable to law-enforcement personnel last month. On Monday, the notice was made available for public viewing through the Interpol website.
The announcement urged those who have information of his whereabouts to contact police.
Vorayuth, who is better known as “Boss”, is listed as being wanted in Thailand on charges of reckless driving causing the death of another person, causing damage to another person, not stopping to aid an injured person and not reporting to officials.
The Interpol announcement also said he was wanted for driving under the influence of alcohol causing death and driving more than the allowed speed limit.
According to Thai police, all charges except reckless driving causing the death of another person have expired. He initially faced four charges of speeding, drunk driving, fleeing the scene of an accident and causing death by dangerous driving.
The statute of limitation on fleeing the scene of an accident, which carries up to six months in jail, expired recently, while the speeding and drunk-driving charges have been expired for some time. The remaining charge, which carries a penalty of up to 10 years in jail, will run out in 2027.
Vorayuth is alleged to have ploughed his Ferrari into a policeman riding a motorbike in Bangkok in 2012, dragging the officer to his death, while driving drunk.
After years of giving prosecutors the run around, the now 35-year-old billionaire has become an emblem for the impunity enjoyed by the rich and connected in an unequal Thailand.
Earlier this year he fled the Kingdom after an arrest warrant was finally issued following a series of no shows at police interviews.