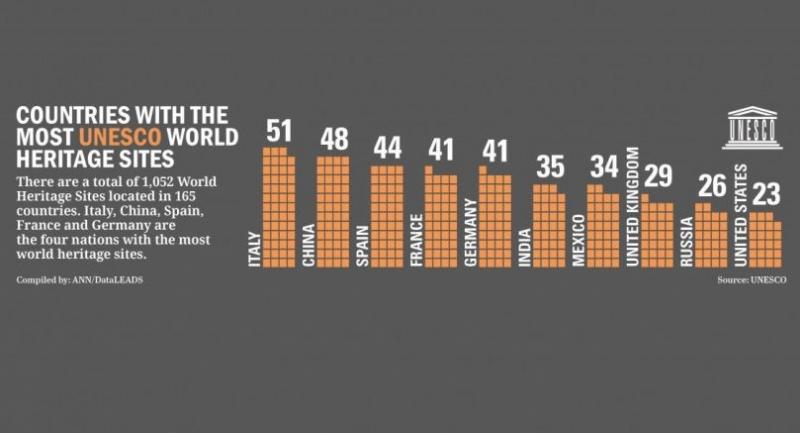 Countries with the most Unesco world heritage sites

Italy has the highest number of Unesco heritage sites in the world.  In Asia, it is China and India that house the most heritage sites.

Founded on November 16, 1945 the U.N. cultural organisation, Unesco was created to promote international collaboration in education, science and culture as a way to contribute towards world peace.

Every two years the Unesco, the United Nations Educational, Scientific and Cultural Organisation, holds the convention on conferring the world heritage status on places of immense cultural and physical significance. It is an exercise towards creating an environment of dialogue between civilizations, cultures and people.

As of this year there are a total of 1073 sites, out of which 832 are Cultural sites, 206 are Natural sites and 35 are mixed sites. In Asia it is China and India that house the most heritage sites.

Spread across various places like Beijing, Xian, Sinchuan, Qufu, Lishan and many others, China is second to Italy with 48 sites marked as culturally and physically significant. Out of these 48 sites 37 are Cultural sites, 8 are Natural heritage sites and 3 are both Natural and Cultural.  The most famous heritage site in China is The Great wall of China followed by Imperial Palaces of the Ming and Qing Dynasties in Beijing and Shenyang: The Forbidden City, Shenyang Imperial Palace.

China’s strong and successful international lobbying for Unesco acclaim is also seen as soft power instrument to showcase the ‘glorious past’ of the nation. While the inscription of sites increases tourism it also renders these place fragile and throws challenges towards preserving them for longer time. The Chinese government has capped the number of tourists at certain sites to preserve the ecology and balance as per the Unesco bid.

Spain has third most number of World Heritage sites. Cities like Toledo, Cordoba and Salamanca possess some of world’s most historical monuments like Great Mosque in Cordoba, Cathedral in Santiago.

France has the fourth most sites with currently 30 different Unesco World Heritage sites. The first French sites were recognised in 1997. Some of these sites are Chartres Cathedral and  Mont-St-Michel. Unesco recognised a large number of historic highlights of Germany´s monuments to be a World Heritage Site bringing it on number fifth. Mexico City is home to various Aztec ruins and beautiful colonial architecture.

India is second in line to China with 35 Heritage sites. It is among the top countries with most number of sites on the heritage list. Out of the 35 sites, 27 are of cultural importance and 8 are Natural sites. From Nalanda University in Bihar, to Khangchendzonga National Park in Sikkim, Churches and Conventions in Goa, and the famous Taj Mahal in Agra India has marked its presence on the Unesco list.

Indian state is lobbying for more natural sites to be on the list since it believes that the current list reflects the heritage of India in an incomplete manner, with more emphasis on cultural sites and less on natural sites.

More recently Unesco added an ancient temple site in Cambodia to its world heritage list, bringing the number of heritage sites in the Southeast Asian country to three.