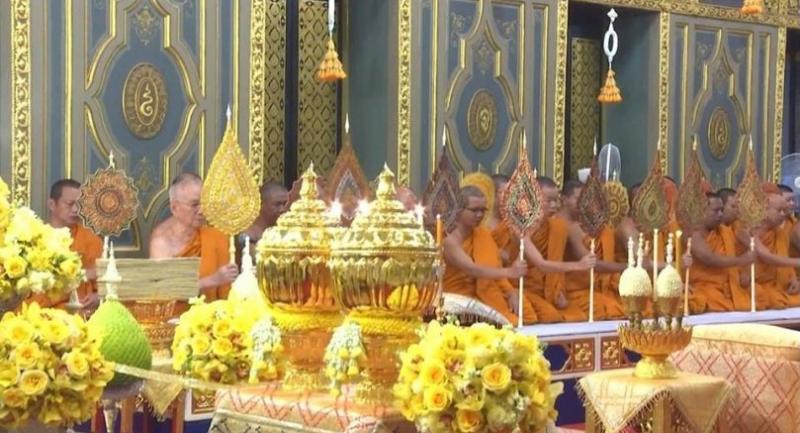 5.50pm : Princess Sirivannavari, grand daughter of the late King and daughter of King Rama X, leads the 77-horse cavalry troop in the sixth procession. The King and HRH Princess Maha Chakri Sirindhorn brought the two Royal Urns containing Royal Ashes in a Royal car that followed the calvalry troops. The Urns will be enshirned in Wat Rajabopidh and Wat Bavoranives.

5.45pm : The sixth Royal procession of honour for the late King starts. The Royal Ashes are transferred from Phra Sri Rattana Chedi in the Temple of the Emerald Buddha to be enshrined at two temples – Wat Rajabopidh and Wat Bovoranives.
2.20pm : The fifth procession reaches Chakri Maha Prasat Throne Hall. The Royal Reliquary Urns is brought to the Throne Hall's Heavenly Abode, alongside the Royal Relics of the former Kings of the Chakri Dynasty.

2.15pm : The King and HRH Princess Maha Chakri Sirindhorn as well as other Royal family members join the fifth procession of Honour which features the Rajendrayan or the Royal Palanquin with Four Poles carrying the Royal Reliquary Urns to the nearby Chakri Maha Prasat Throne Hall.

The late monarch's Royal Relics will be kept in the Throne Hall's Heavenly Abode, alongside the Royal Relics of the former Kings of the Chakri Dynasty.
The procession covers 63 metres and spends only about 10 minutes. It is the shortest of the sixth processions featured in the Royal Cremation ceremonies of the late King.
2.05pm: The Royal Reliquary Urn is transferred to the Royal Palanquin with Four Poles or the Rajendrayan.
The Royal Palanquin with Four Poles, or Rajendrayan (Palanquin with Busabok Throne), is made of carved and gilded wood, and carried on four poles by 56 strong men. The palanquin is 4.23 meters high, 5.48 meters long, and 1.03 meters wide.

The royal palanquin is used by the monarch in a grand procession known as the four-line procession, such as when the king proceeds from the royal residence in the Grand Palace to pay homage to the Emerald Buddha in the Temple of the Emerald Buddha on the occasion of the Royal Coronation Ceremony. It is also used to transfer the royal Reliquary urn containing the royal relics of the king, the queen, or members of the royal family from the Royal Crematorium at Sanam Luang into the Grand Palace.

1.47pm : The fifth Royal procession of honour for the late monarch is about to begin.

10.45am : The King then presides over a royal merit-making ceremony for the Royal Relics of his father, His Majesty the late King Bhumibol Adulyadej, at Dusit Maha Prasat Throne Hall in the Grand Place.

The King was accompanied by Royal Family members including his daughters HRH Princess Bajrakitiyabha and HRH Sirivannavari Nariratana, as well as his sisters; HRH Princess Maha Chakri Sirindhorn, and Princess Ubolratana Rajakanya.

Before praying for the late monarch, the King presented royal fans made especially for this event to the Supreme Patriarch, His Holiness Ariyavongsagatanana, and to 30 other venerable monks from royal temples throughout the country.
Somdej Bhuddhajarn, the abbot of Trimitr Temple, gave a sermon.

Then, led by the Supreme Patriarch, the 30 monks chanted a prayer.

12.10pm : The King leaves the Grand Palace after the fourth procession arrived there. The Royal Cremation ceremony for Friday ends.
11.15am : The fourth procession will cover 1,074 metres and spend about 30 minutes.
11am : His Majesty the King, HRH Princess Maha Chakri Sirindhorn join the Friday Royal procession of honour that will bring the Royal Reliquary Urn containing the Royal Relics to Dusit Maha Prasat Throne Hall, while the Royal Ashes in the cone-shaped container is transferred to Phra Sri Rattana Chedi in the Temple of the Emerald Buddha.

10.55am : The fourth Royal procession of honour commences.

10.43am : The fourth Royal procession of honour to bring the Royal Relics and the Royal Ashes to the Grand Palace is about to start.

9.30am : The King presides over a merit-making ceremony for the Royal Relics and Ashes which includes giving alms to senior monks.

8am : His Majesty the King arrives at Sanam Luang ceremonial group to collect Royal relics and Royal ashes of his father, HM King Bhumibol Adulyadej, was cremated on Thursday night. The Royal relics and Royal ashes are put into six decorative Royal Urns. They will be given to HRH Princess Maha Chakri Sirindhorn, HRH Princess Chulabhorn Valayalaksana and Princess Ubolratana.
Officials then move the Royal Urns to the main Royal pavilion at the ceremonial ground.


5.15pm :  Royal and foreign guests attend the Royal Crematorium at Sanam Luang ceremonial group and wait for the ceremony to begin.


1.13am :A Royal conveyor is brought to Phra Maha Phichai Ratcharot and the Royal Urn is moved from the carriage.
12.56am: The second Royal procession arrives at Sanam Luang ceremonial ground. The Royal Urn will be transferred to the Royal Gun-carriage, or Rajarot Puen Yai.
11.25am:The second procession is proceeding from Rajadamnoen Nai Road into the middle of Sanam Luang, covering a length of 890 meters. It will spend about two hours and 2,406 troops participated.

10.43am : The second Royal procession of honour begins.

10.38am :Prime Minister Prayut and other delegates walk to the procession.
10.35am : Soldiers move the conveyor out of Phra Maha Pichai Ratcharot.
10.27am : The Great Royal Urn is being transferred by conveyor to Phra Maha Phichai Ratcharot on to Rajdamnoen Nai Avenue.


9.48am : The first Royal procession is about to reach eastern side of Wat Pho where the Great Victory Chariot or Phra Maha Phichai Ratcharot is waiting.
9.41am : The first Royal procession is travelling along Ta Maharat road and is about to turn to Tai Wang road.
9.32am : The procession is progressing along Maharat Road to Wat Phra Chetuphon or Wat Pho. The Royal Urn will be preceded by Somdej Phra Wannarat of Wat Bovornnivej Viharn. The senior monk will read the Holy Doctrine or Abhidhamma. He will sit on the Lotus Petal Palanquin or “Phra Saliang Klip Bua” leading the procession of honour when the Royal Urn is transferred from Dusit Maha Prasad Throne Hall in the Grand Palace through the West gate to the Great Victory Chariot in front of Wat Phra Chetuphon.

9.30am : His Majesty the King and HRH Princess Maha Chakri Sirindhorn as well as the King's children join the first grand procession. Accompanied them were Prime Minister Prayut Chan-o-cha, his deputy Wissanu Krea-ngam, as well as Privy Councillors.

9.25am : The first grand procession of honour for the late monarch begins.
Phra Yannamas Sam Lam Khan is 7.73 meters long and 1.78 meters high and weighs 700 kilograms. It was built in the reign of HM King Rama II for the Royal Cremation of HM King Rama I.
9.15am : The first Royal procession is about to start. Supporting the Royal Urn, both on Palaquin with Three Poles and the Great Victory Chariot, are two well-respected Royal doctors – Dr Prasit Watanapa, dean of Faculty of Medicine at Siriraj Hospital, and Dr Pradit Panchavinnin, director of Siriraj Piyamahakarun Hospital.
Dr Prasit said in his last interview that their hands would represent the hands of all 68 million Thais in supporting the Royal Urn. “Please know that we represent you. Our hands are like your hands,” he noted.

8.48am: Officials place the Royal Urn on an elevated Royal pavilion that is next to the Phra Yannamas Sam Lam Khan (a palanquin with three poles).

8.38am : Kings' Guard officers transfer inner of the Royal Urn to be in front of Dusit Maha Prasat Throne Hall.


7.45am : Officials remove the outer of the Royal Urn of the late monarch at Dusit Maha Prasat Throne Hall before transferring the Royal Urn to the first grand procession of honour.

7.25am: His Majesty King Maha Vajiralongkorn arrives at Dusit Maha Prasat Throne Hall. The King lights the candles and joss sticks in front of a Buddha statue and monks to start the Royal Cremation Ceremonies.


4.30am : Cabinet members, military commanders, the Supreme Court president, and the chairmen of independent organisations gather at Government House in preparation for the Royal Cremation ceremonies.
They are accompanied by their spouses, as they wait at Government House to travel together to the ceremonial ground.
The governor of Bangkok and the Cabinet secretary-general also travel with them.