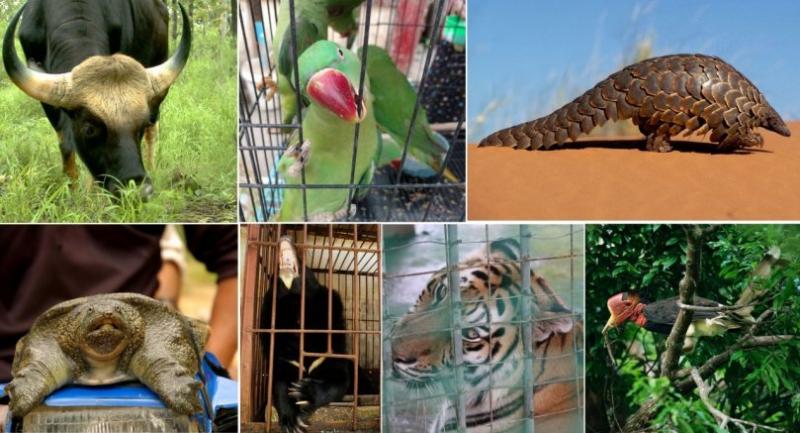 TIGERS, ELEPHANTS, bears and pangolins are four of the most widely traded species in the Golden Triangle border area where Thailand, Laos and Myanmar meet, according to a report by WWF released yesterday.

Rhinos, serow, helmeted hornbill, gaur, leopards and turtles round out the list of endangered species that are openly sold in a region considered “ground zero” in the illegal wildlife trade.
The “Top 10 Most Wanted” list is based on surveys by WWF of illegal wildlife markets, shops and restaurants, and reports from TRAFFIC, the Wildlife Trade Monitoring Network.
They represent species most often seen for sale in a criminal trade that threatens wildlife across Asia and into Africa.
A major driver of the trade is tourists from China and Vietnam travelling to areas such as Mong La and Tachilek in Myanmar, and border areas such as Boten and the Golden Triangle Special Economic Zone in Laos.

“Illegal, unregulated and unsustainable trade is driving wild populations of hundreds of species into endangerment, not only in the Greater Mekong but around the world,” said Chrisgel Cruz, technical adviser on Wildlife Trade for WWF-Greater Mekong.
“Border areas like the Golden Triangle are where this trade thrives and where we must work hardest to protect the defenceless.”
Many of the Asia’s poached and farmed tigers pass through the Golden Triangle, where they end up in tiger wine, on dinner tables, in dubious medicines, or as luxury items and jewellery.

The growing trade in elephant skin, combined with continuing demand for ivory, is threatening elephant populations from Asia to Africa. Bear farms are rampant across the region, where both Sun Bears and Asiatic Black Bears – mostly captured in the wild – are kept in tiny cages while their bile is collected for traditional medicine and folk remedies.
“Bear farms and tiger farms, along with wide open wildlife markets across the Golden Triangle, are a menace to wild populations of these species and should be closed,” said Bill Possiel, WWF-Greater Mekong regional conservation director.
“This region has a deserved reputation as both a destination and source of some of the world’s most endangered species and that has to stop or these species could go extinct.”
African rhinos are being poached at the rate of three per day to feed the demand for their horns in places such as Vietnam.
The horns supposedly cure hangovers and fevers but in fact are made from the same material as human nails, with no medicinal value.
Also covered in keratin is the pangolin, which is in high demand in China and Vietnam for its scales and is considered the most trafficked animal in the world.
Another species, the helmeted hornbill, has a massive helmet-like structure on its head that is ideal for carvings similar to ivory.

The serow, a mountain-dwelling, goat-like species, is highly prized for its meat and body parts, which are used in traditional medicine in Laos. Leopards, which were once widely found across Southeast Asia, are now poached for their skin and skulls.
Turtles are widely sold, both alive and as decorative objects.
Finally, the world’s largest species of cattle, the gaur, is declining globally due to its demand for its impressive horns.

WWF’s work includes raising awareness across Asia on the need to close at least 20 markets by 2020.