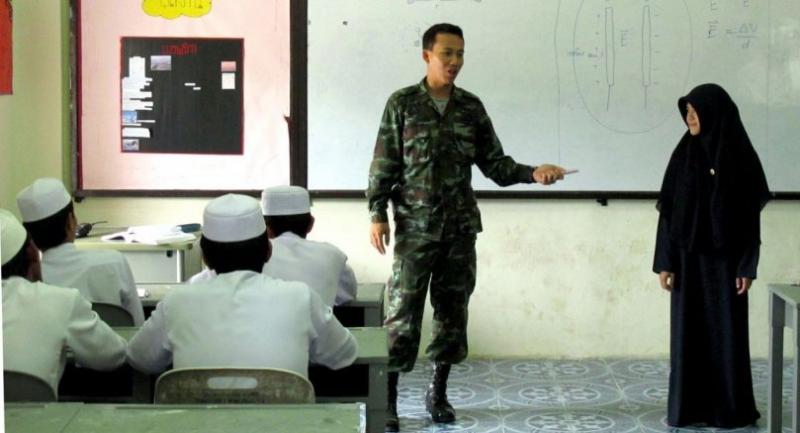 Narathiwat governor Suraporn Prommoon said on Monday he was confident that the inclusion of Thai history and Thai monarchy content in the curriculum taught in Islamic boarding schools would help restore peace to the restive deep South.

The use of lessons about great merits by Thai kings – from the Sukhothai era until recent monarchs particularly HM the late King Bhumibol Adulyadej and HM King Maha Vajiralongkorn – and other events in Thai history would help boost the students’ understanding of, and pride in, the Thai nation, he said.
These students could then help pass on accurate information to other people in the multicultural deep South, where some misunderstandings and different views to those of the state existed, he added.
Suraporn’s comments came at a press conference at a Sungai Kolok hotel to announce the teaching of this special subject at 62 Islamic boarding schools (pondok) in 13 districts of Narathiwat under the King’s royal initiation. This will start in the second semester of the academic year.

File photo
It will be a compulsory subject in the Office of Non-Formal and Informal Education (NFE)’s study programmes for its students nationwide. The first 50 NFE teachers who underwent training in the new subject were also at the press conference.
The founder of Saeng Arunsat Pondok Institute in Waeng district, Monchai Sari, said he was impressed with the new subject’s content. Monchai said it taught children how our ancestors had sacrificed themselves for the wellbeing of younger generations, and it would help students realise the importance of civic duty and unity with others in the nation.