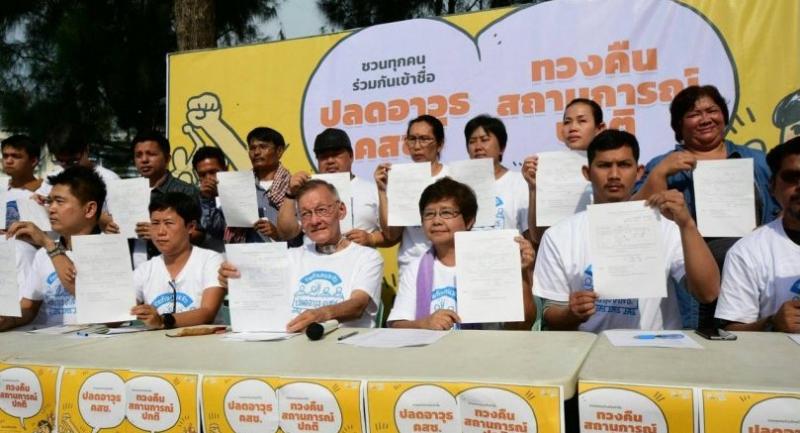 TWENTY-FOUR civil groups yesterday launched a campaign to seek at least 10,000 signatures seeking to “disarm” the ruling junta and revoke 35 orders and announcements issued by the National Council for Peace and Order (NCPO) under the absolute powers afforded by Article 44.

“These so-called laws have infringed people’s rights and consequently obstructed public voices in decision-making procedures despite effects on their communities,” said Jon Ungpakorn, an executive director of the Internet Law Reform Dialogue (iLaw), at Thammasat University’s Tha Phra Chan campus. “We can’t be truly democratic with lack of sufficient public participation.”
The petition would be undertaken in line with the 2017 charter’s Article 133, which requires 10,000 signatures, endorsed with copies of national IDs, to propose legislation to the parliament.
A bill deliberated in parliament is a possible way to overturn the laws, some of which enacted under the sweeping Article 44 powers of the NCPO head, Prime Minister Prayut Chan-o-cha. The power was first given under the now-defunct 2014 interim charter, then addressed in the new charter.
However, the groups plan to file the petition only to the elected Lower House after the upcoming election.
They said they have little faith in the junta-appointed National Legislative Assembly (NLA), whose performance “has not protected public interest but rather favoured nepotism”, according to Jon.
“This attempt will at least put pressure on the NCPO to consider the revocation as soon as possible,” he said.
Many of the participating groups have faced or feared prosecution under NCPO laws. These include laws prohibiting political gatherings of five or more people and empowering military officers with policing authority, including the power to order arbitrary detention.
Sunee Chiawarose, a former National Human Rights Commissioner and currently a coordinator of the Women’s Movement, said that pressures are felt not only by civil society but also by those who enforce the law.
“Basically, both we and they have to be oversensitive in almost any activities we perform,” Sunee said. “We were afraid of being prosecuted while they could be afraid of neglecting their duties.”
The women’s group has been active in land management and labour rights issues, but she has had to tone down its activities to comply with the NCPO orders. “We have to ask for their permission every time we want to hold a forum,” she said, adding that some activities had been ceased while they were being conducted.
Chatchay Thammo, a manager of the North Activist Community, said he had a first-hand experience of being tracked down by officers under the post-coup atmosphere.
“When we raised points about local developments and infrastructure, they feared that we could cause sedition in Chiang Mai,” Chatchay said.