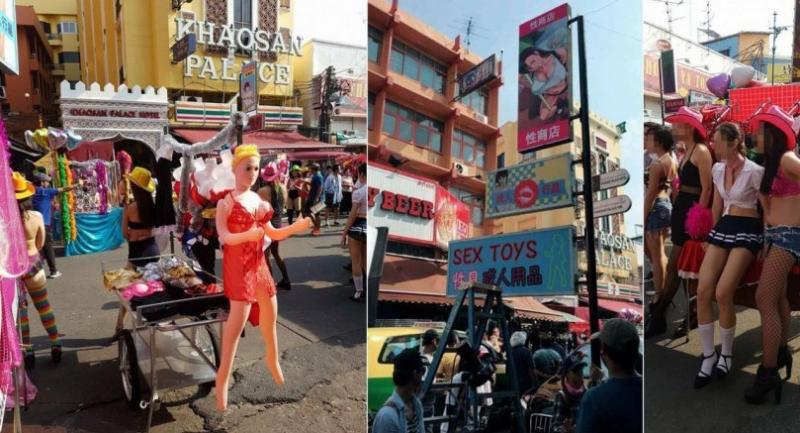 BANGKOK POLICE have filed charges against a movie production firm after its personnel were caught preparing to shoot alleged indecent and pornographic scenes on Khaosan Road.

Indo Bangkok Film Co Ltd was on Wednesday seen filming scenes, between 9.30am and 11.30am, featuring women wearing revealing costumes selling what appeared to be sex toys. Placards were set up displaying the words “Adult Toys” and “Sex Toys” as well as photos of near-naked women.

The filming was recorded by Pu Banglampoo, who posted a video clip on Facebook that went viral yesterday.
Pol Colonel Pitak Suthikul, police commander of Chanasongkram Police Station, said that the film company on Tuesday asked police for assistance and permission because they wanted to film scenes for the movie “Happy Bhag Jayegi Return (2018)” on Khaosan Road.
The film apparently was intended for distribution in India.
The crew showed their permission form from the Tourism Authority of Thailand in which the department clearly asked the team to be aware not do anything that caused a negative impact on Thailand’s tourism.

Pol Colonel Puwadon Unpho, deputy traffic commander at the same station, said he had been informed that the movie’s location would be identified as China, not Thailand.
“I was briefed on the details of the scenes and told that the firm had already shot several scenes in Thailand in many areas,” he said.
However, Pitak said that when he saw the scenes and items to be displayed on Wednesday, he ordered the shooting to stop immediately because the photos, items and placards were not appropriate.
He then had officers file four charges against the firm.

The company is based in Pattaya and has two executives, one Thai and one Indian. Both executives were yesterday reportedly on their way to acknowledge the charges.
The filmmakers were charged with offences including not following authorities’ orders, exporting or disseminating pornographic movies for commercial purposes, and acting indecently in public.