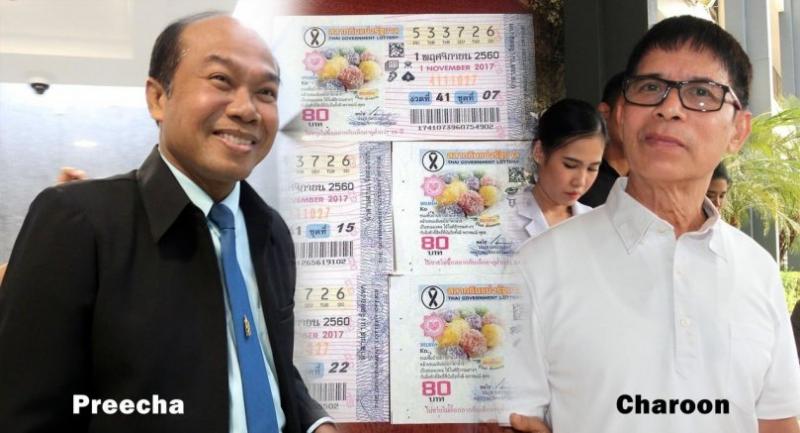 POLICE are checking 4,000 audio clips as key evidence in the probe into a dispute in Kanchanaburi province over Bt30 million-winning lottery tickets.

Rattanaporn “Jeh Babin” Supathip
The CSD probe into the dispute between retired policeman Charoon Wimul, 62, and teacher Preecha Kraikruan, 50, over ownership of the tickets has yet to question local policemen, Maitri said. Three civilians interrogated at the Highway 6 precinct for 18 hours were later allowed to go home. Investigators would hold a meeting in a couple of days about this case, he added.
Contradicting Maitri, a source at the Highway 6 precinct said five local policemen were summoned for questioning and were released at 4am yesterday along with a male civilian, while two female lottery vendors were released home an hour later.
Meanwhile, Preecha, a school teacher at Thepmongkolrangsi School in Muang district, said he believed his three witnesses – Rattanaporn, lottery vendor Pattarida Phromta, and a local bank chauffeur nicknamed “Phaen” – would not retract their previous testimony that backed him because “they are telling the truth”.
He also took exception to national police chief Pol General Chakthip Chaijinda’s remark this week that compared this case to that of school teacher Jomsap Saenmuangkhot, who allegedly produced false witnesses and evidence to seek a retrial into a fatal hit-and-run case. He said his case was not that complicated and he hoped police would solve it by the end of this month, as Chakthip had promised.
Preecha insisted he was the real owner of the tickets and had evidence to back up his claim, which he would present in court. “I don’t need to show my evidence via Thai social media to get support. I’m not worried that police are trying to paint me and Jeh Babin as liars,” he said. He dismissed as untrue a rumour that some of his lawyers wanted to withdraw from the case. “Now it is up to the police probe. I will accept the court ruling.”

Preecha
A police source said that the probe had obtained some clarity and progressed in the right direction after questioning key witnesses on Thursday. Officers would take into consideration forensic and other evidence, including 4,000 audio clips of witnesses, and they were currently checking if they were authentic or doctored, the source said.
The controversy hit the headlines after Preecha complained to police that he had bought and lost five tickets that had later won the jackpot in the November 1 draw, which was then collected by Charoon. Although the retired policeman insisted he had bought the tickets and collected the prize accordingly, police have frozen the remaining Bt24.35-million prize money in Charoon’s bank account pending completion of the investigation.