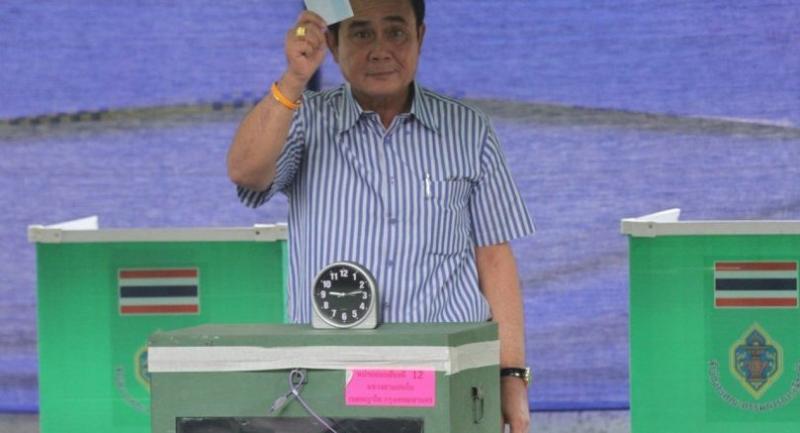 WHILE THE POTENTIAL review of the MP election bill by the Constitution Court has caused concerns of a further election delay, Prime Minister General Prayut Chan-o-cha has vowed the process will not affect the road map.

The National Legislative Assembly (NLA) had dropped the MP election bill like a hot potato, passing it to the prime minister to decide whether the bill needed a court review to make sure it was constitutional.
If the court deems it is constitutional, it could be passed into law. If not, the NLA would have to take time to correct it accordingly.
Prayut said yesterday that the governments’ legal experts were still considering whether to submit it for judicial review but that the Cabinet should be able to forward the draft for royal endorsement by April 12, before the long Songkran holiday begins.
“The thing is that we have to make sure there won’t be legal conflicts that will cause trouble during the royal consideration process,” he said.
NLA President Pornpetch Wichitcholchai said yesterday that the bill had been submitted to the PM and, constitutionally, he had the authority to send it to the Constitutional Court himself, bypassing the NLA.

Before that, some political observers were already criticising the inconsistency among legislators, questioning why they would challenge the very bill they had written themselves and whether this was another conspiracy to postpone the poll.
The atmosphere of mistrust grew after the NLA put off the enforcement of the bill by three months after its |promulgation, delaying the election by the same amount of time.
The bill had already been passed twice in normal legislative sessions and was then also reviewed by a joint committee comprising the NLA, the Constitution Drafting Commission (CDC), and the Election Commission (EC).
However, the CDC still advised that it be submitted for judicial review.
They argued that a clause that allows electoral officials to assist physically challenged or disabled voters in the poll booth might pose problems, as the Constitution requires votes to be cast in secret.
Letting this slide could bring down the entire election because, at some stage in the future, someone might refer the issue to the Constitutional Court, the CDC reasoned.
In a related development, Democrat leader Abhisit Vejjajiva yesterday offered his support for the constitutionality review, for the sake of clarity, but he added that Prayut should ensure it was still possible to hold an election in February.
He said the PM could consider cutting the postponement of the enforcement down to 60 or 30 days from the current 90 days.
“This depends on how sincere the PM is, because he has the authority to do it or he can order the NLA to do it,” Abhisit said.
Pheu Thai Party legal expert Chusak Sirinil, meanwhile, questioned whether the government was playing a game and stalling for time.
Legislators could have written the bill in line with the charter but they didn’t, he said.
“If they really do it [send the bill for review], they will have to start over until they can seek royal endorsement again,” Chusak said.
“We don’t know how long the court will take to review the bill and if they rule it is unconstitutional, the amendment will take some time. So, the election will definitely be delayed.”