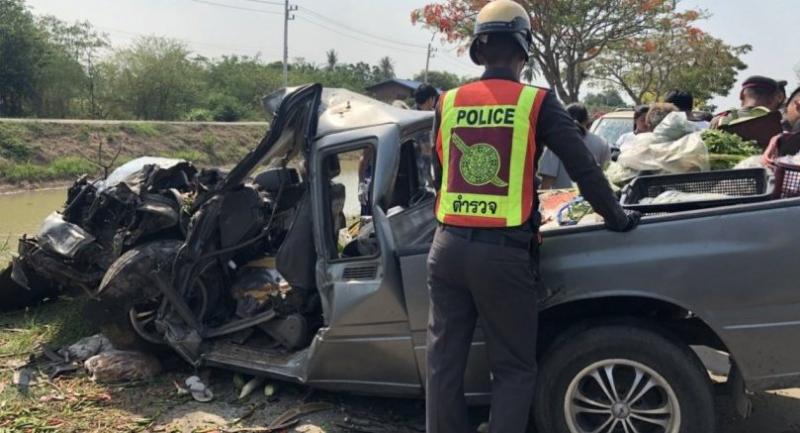 This year also saw a higher number of injured people with 3,897 cases in 3,724 road accidents. Last year, 3,808 people were injured in 3,690 road crashes.
Most of the road carnage this Songkran stemmed from drunk-driving (40 per cent) and speeding (26 per cent) and 80 per cent of accidents involved motorcycles and 65 per cent took place on straight roads, Deputy Interior Minister Suthee Makboon told the media.
During the seven-day monitoring period (April 11-17), Nakhon Ratchasima, the “gateway to the Northeast”, reported the highest accumulated death toll (20) while the northern province of Chiang Mai had the highest number of injured (142) and accidents (133), he said. Only Ranong, Samut Songkhram, Nong Khai and Nong Bua Lamphu reported no road accident deaths during Songkran, he added.

On Tuesday alone, there were 307 accidents that killed 26 people and wounded 336 others. Speeding was blamed for 28 per cent of accidents, drunk driving for 26 per cent and suddenly cutting in front of another vehicle for 19 per cent.
On Tuesday, officers manning 2,029 checkpoints nationwide arrested 146,589 motorists; 39,572 motorcyclists and their passengers for not wearing crash helmets and 37,779 people for not having a driver’s licence.
Meanwhile, the number of vehicles seized from drunk drivers during this Songkran–16,288 – was a 100 per cent increase over the previous Songkran, National Council for Peace and Order (NCPO) and Army deputy spokeswoman Colonel Sirichan Ngathong told a separate press conference yesterday.
The NCPO and related authorities, from April 11-17, had identified 490,512 cases of drunk driving (280,631 motorcyclists and 208,881 motorists), down 38 per cent from the previous year, she said.

As many violators were slapped with fines and their driving licences confiscated, the officers also impounded 16,288 vehicles (11,768 motorcycles and 4,520 cars/trucks) from such drunk drivers. During the previous Songkran, 8,128 vehicles were impounded, she said.
In a mean time, national police deputy chief Pol General Chalermkiat Srivorakan said 8,348 houses nationwide had joined the vacation home-watch scheme for April 11-17 and none of those houses had any instances of theft. So far owners of 6,598 houses had returned from vacation.
He said the number of participating houses this Songkran was a 40.8 per cent increase, or 2,421 houses more than those that participated in the scheme last Songkran. The police smartphone application “Police I lert U” was downloaded 29,576 times during April 4-15, bringing the total app download to 354,566 times, he said although only 134 users alerted police of emergency/crimes using the app.
During April 11-17, a total of 213 crimes to life or bodily injury took place and suspects were apprehended in 125 cases. Of these crimes, 100 cases were about physical assault and 72 suspects were apprehended for 47 such physical assault cases. There were nine murder cases and police had arrested the suspects, he added. A total of 422 crimes targeting assets took place – in 227 cases police nabbed the suspects.