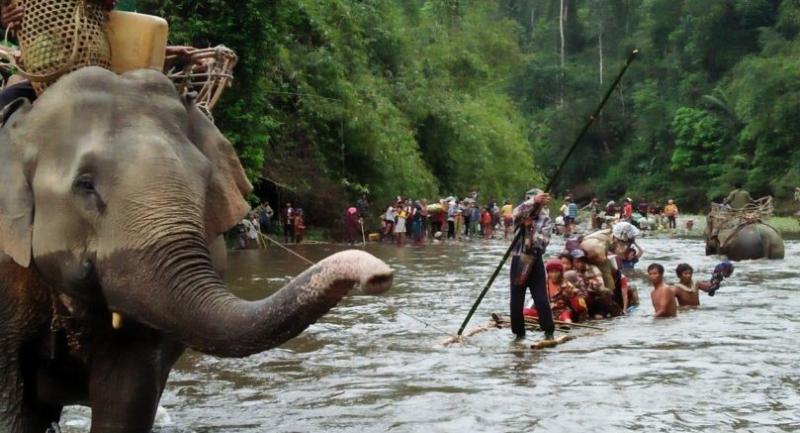 Mahouts and their elephants help sick, young and elderly villagers displaced by conflict cross a chest-deep river in Myanmar's remote Kachin state, where thousands of people recently completed a trek through dense jungle to safety.

The people of Awng Lawt in Kachin state were forced from their homes by escalating fighting between rebels from the Kachin Independence Army (KIA) and Myanmar's military earlier this year.

It is a grinding conflict that plays out away from the more prominent global headlines generated by violence in the country's west, where the army has driven out some 700,000 Rohingya Muslims since August to fierce international condemnation.

For three days, the villagers took shelter in their paddy fields as the sound of gunfire and fighter jets came ever closer.

But as shells started to fall among their homes, village leaders ordered an evacuation to IDP camps dozens of kilometres away.

The slowest and most vulnerable could only manage to hack through the jungle undergrowth for three or four hours a day.

On May 2, after nearly a month and with food running out, they reached the river where some local elephant owners came to their aid.

Remarkable footage shows Kachin villagers in bright traditional headdresses hoisting youngsters onto the backs of several of the giant creatures to cross the waterway.

"We had some elderly, sick and blind people," said one villager, preferring not to give his name. "So we asked the mahouts for help to carry those people."

Working elephants are widely used in the rough terrain of Kachin state, including by rebel groups fighting Myanmar's army, which is equipped with helicopters and fighter jets.

Most of the villagers are now in camps but, as the fighting rages, they do not know how long it will be before they can return home.

Myanmar has been mired in almost continuous conflict with ethnic insurgent groups for more than 70 years.

More than 100,000 people have been displaced by the violence in and around Kachin state, according to the latest UN figures.