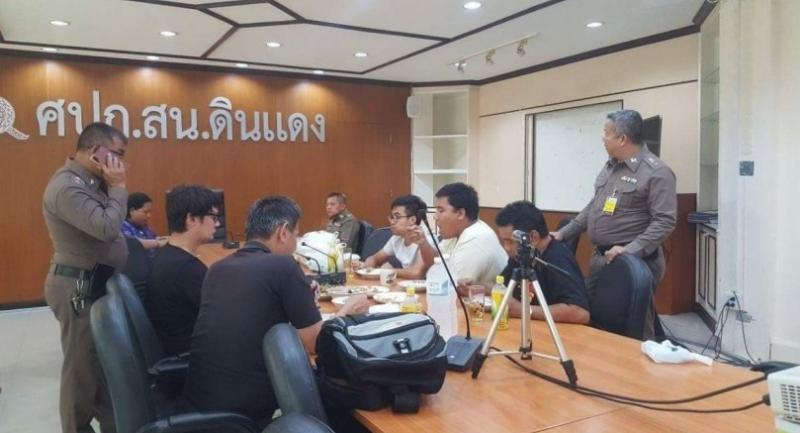 Outpouring of support for pro-poll detainees

LOCAL AND INTERNATIONAL ORGANISATIONS CALL ON THE JUNTA TO RELEASE DETAINED LEADERS; THAMMASAT SAYS NO TO LEGAL ACTION

INTERNATIONAL AND local communities yesterday lent their support to the pro-election group that is calling on authorities to release leaders arrested on Tuesday after their attempt to rally for an early election was suppressed.
Prime Minister Prayut Chan-o-cha said his government needed to enforce the law to stop the activist movement and to protect public safety, prevent turmoil, and move the country forward to democracy and good governance.
A dozen activists, led by the Democratic Restoration Group (DRG), were arrested and charged with sedition which carries a maximum seven-year prison term, and with violating the military junta’s ban on political gatherings of more than five people.
Well-known young activists Nuttha Mahattana, Rangsiman Rome, Sirawith Seritiwat, Ekachai Hongkangwan and Anon Nampa are among the arrested people. They were detained together yesterday at Din Daeng police station.
Many activists and politicians visited them at the stations, including Thanathorn Juangroongruan-gkit of Future Forward Party, former police commissioner Pol General Seripisut Temiyavet, and representatives of the Pheu Thai Party.
Seripisut offered a Bt1.5-million guarantee for the 14 activists but they had not been granted bail at press time last night.
Their lawyer, Krisdang Nutcharas, said the police might ask the court permission to extend their detention today.
Nuttha sent a message from her cellphone, saying she and her colleagues were in good spirits and they would never give up their fight for democracy.
A message from Sirawith said: “I will not allow the junta to stay in power for five years.”
Rangsiman called on politicians to join the people’s movement to fight for their right to have an election.

‘Drop all charges’
Earlier, the UN Human Rights Office called for the immediate release of pro-election activists. “We have consistently urged the Thai government, as a party to the International Covenant on Civil and Political Rights, to fully respect the rights to freedom of expression and peaceful assembly,” the office said in a statement posted on Facebook.
The New York-based Human Rights Watch (HRW) yesterday also called on Thai authorities to immediately drop all charges and unconditionally release the 14 pro-democracy activists who had peacefully expressed their opposition to military rule.
“The arrest of peaceful democracy activists calling for free and fair elections shows that Thailand’s military junta has no intention of easing its oppressive rule,” said Brad Adams, HRW Asia director, in a statement.
Two Thammasat student organisations also called for the release of the activists, saying the students supported freedom of expression and assembly.
The DRG stayed overnight |at the Thammasat University Tha Pracha campus on Monday before their planned 5km march |to Government House was |foiled.
Thammasat University said |
yesterday that despite the police’s suggestion, it would not pursue legal cases against pro-democracy protesters for breaking the university’s gate key.
“The university views the incident as caused by the chaotic situation. The damage was also minor,” the university said in a statement.
“We will not pursue cases against students and activists but will instead try to communicate with them more.”
Thammasat is regarded historically as a stronghold of the pro-democracy movement. Major student uprisings in Thai history in 1973 began at its Tha Prachan campus.