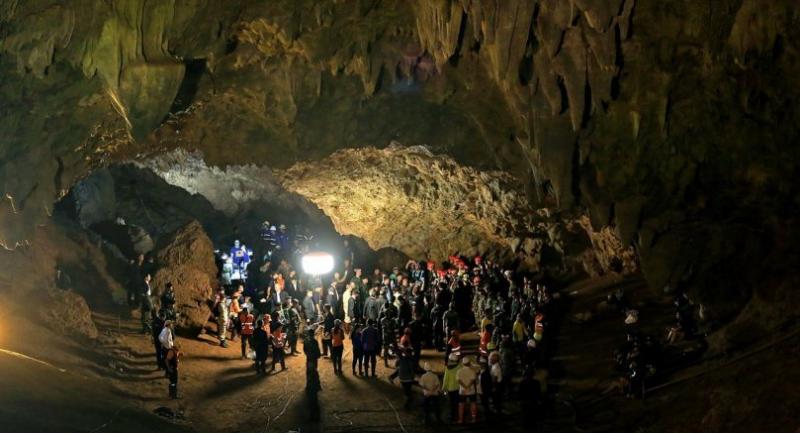 THE DESPERATE search for 12 young footballers and their coach who have been missing in a flooded Chiang Rai cave since Saturday afternoon continued yesterday, with rescuers considering tunnelling through the roof as a last resort.
In Tham Luang cave, a team of divers led by Navy SEALs continued struggling through muddy water and darkness to reach the end of the 10-kilometre-long cave, where it is hoped the 12 teenagers and their 25-year-old coach are sheltering.

Meanwhile, soldiers combed the hillside above in search of a ceiling shaft through which rescuers might rappel down into the cave.
At its entrance in Mae Sai district, distraught parents who arrived at the weekend, led prayers and rites for the safe return of their loved ones.
“I prayed for God’s intervention, but I’m certain in my heart that they will survive. They have been inside the cave before,” the father of one of the young footballers said.

“My child, I’m here to get you now,” one parent sobbed, while another screamed: “Come home my child!”
Teammates of the missing footballers said they believe the group is still alive as the coach and players were familiar with the cave, which they had trekked to the end of many times.

Five teammates who had previously visited the cave with the missing group told officials at Tham LuangKhun Nam Nang Non National Park about the directions they usually took inside the cave, in order to give rescuers a better idea of where to look.
Ban Pa Yang student Paeng Bualuang said he had been inside the cave along with friends - who were now among the missing teens - three or four times and they had reached the end of cave.
“I believe from the bottom of my heart that my friends are still alive because our coach is familiar with the cave. Inside there are large halls and several spots where people can hide away from water. We also sprayed white paint markings along the way so we wouldn’t get lost and could always find the way back to the entrance,” he said.
Mineral Resource Department chief Tawsaporn Nuchanong told journalists in Bangkok that his office has set up a war-room operation to find the missing teens.
“We are using geological data to look for fissures in the rock which could be used as a way in for the search team,” he said. He pointed to two potential entrances on a map, saying one marked a crack in the south of a stream while the other is a cliff near a foothill.

“The search teams should be surveying the cracks we identified as possible alternative entrances. If they are too small they might have to be widened,” he said.
Geologist Chaiyaporn Siripornpaibul said in the same briefing that visitors familiar with the cave had previously found crickets there which could serve as food for the missing group.

Acting on a tip-off from local villagers about a possible ceiling passage to the cave from the hilltop above, rescuers on Monday rappelled down from a police helicopter only to find the shaft came to a dead end at a depth of five metres. A second shaft thought to lead into the cave was also found to be a dead end.
Prime Minister Prayut Chan-o-cha said on his return from his official trip to Europe yesterday that he would ask for blessings from the Supreme Patriarch when they met yesterday.
Prayut was scheduled to congratulate the top monk on his 91st birthday at the monk’s Rachabophit Temple in Bangkok.
The PM said he has ordered all authorities concerned to do their utmost to find the missing group.
He also referred to a purported medium who appeared at the rescue site and made a dire prediction on the fate of the missing group. Prayut said his presence was inappropriate.
Chiang Rai Governor Narongsak Osotthanakorn said that what worried him most was continuous heavy rain that was raising the water level in the already-flooded cave. The high water level made the divers’ mission more difficult, he said.
“If we discover the location of the missing kids, it may be necessary to excavate the cave to reach them,” he said.

A working group is now planning to drain water from Nang Non and Nong Nam Pu reservoirs, which are located on lower ground, to aid drainage in the cave.
Deputy Prime Minister Prawit Wongsuwan, responding to queries on the possibility of drilling a shaft down through the cave ceiling, said that officials were surveying the area by helicopter to assess its feasibility.