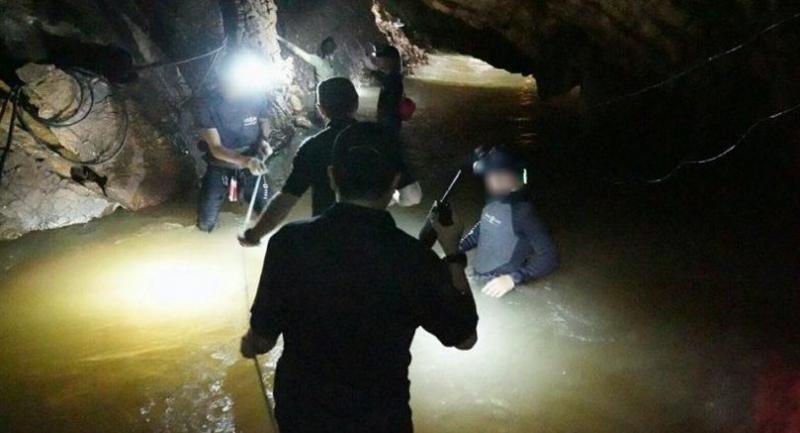 Rescue operations are going ahead at full steam in the Tham Luang cave in Chiang Rai province in the hope of saving all 13 members of a local football club who are believed to be stranded inside since June 23.

The Royal Thai Navy’s SEALs are now trying to dive through 800-metre-wide body of water to get closer to the “Pattaya Beach” part of the cave.
The 12 teenage football players and their coach are believed to have retreated to the dry area when flash floods hit the cave.
After diving through the waters, the SEALs will reach an intersection. From there, the team will have to go about 1.3 kilometres to reach the Pattaya Beach zone.
“There have been many obstacles inside the cave and the water level did not reduce as much as we expected. We are doing our best to overcome them all,” Naval Special Warfare Command chief Rear Admiral Apakorn Yukongkaew said on Sunday.
Six policemen from Australia who are highly skilled in cave diving have already reached the cave. All-out efforts are also being made above the cave. Other teams are trying to explore ways to reach the latter part of the cave from other channels such as via passable shafts.
At present, one of the shafts is about 60 metres deep and rescue workers are trying to determine if they can go down further. A helicopter is preparing to bring drilling equipment up to a spot above the so-called Pattaya Beach. If it can offer a solution, drilling will begin. The drilling sound, it is believed, can also boost the morale of the stranded youths that help is on the way.
Earlier, several shafts had already been ruled out because detailed analysis showed the rocky exterior was about 1,000 metres thick.