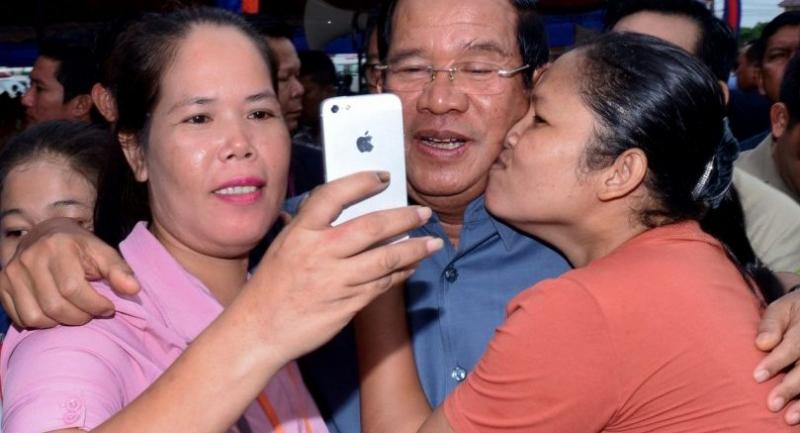 Cambodia ruling party sweeps parliament after vote with no opposition

Cambodian leader Hun Sen has swept all seats in parliament after holding an election with no opposition, as the country settles into one-party rule and a government that could face questions of legitimacy on the world stage.

The strongman has been in power for 33 years but the vote late last month was widely decried as a sham after a crackdown on the rival Cambodia National Rescue Party (CNRP), which was dissolved by the Supreme Court in November.

A spokesman for the National Election Committee told AFP Wednesday as official results were released that the ruling Cambodian People's Party (CPP) won all 125 seats up for grabs and took nearly 77 percent of the vote.

In a post on his Facebook page later Wednesday Hun Sen said the election was "free, fair and just."

Cambodia's new government will be formed next month but problems of credibility could dog the regime as experts believe Hun Sen will try to bolster popular support at home.

"It's like pushing a cart uphill," said independent political analyst Meas Ny. "From now on the new government will be under attack and defending itself."

The results were in line with preliminary tallies and Hun Sen said in a speech earlier in the day that he would take suggestions from parties who contested the election on ideas to "build the country."

Nineteen other political parties took part in the sixth national vote since UN-backed polls in 1993 but many are new or obscure and posed no challenge.

The dissolved opposition is planning on ramping up efforts with governments abroad to put more pressure on Hun Sen.

"We will not abandon more than half of the country who voted for change but were excluded from exercising their choice," Mu Sochua, deputy CNRP leader, told AFP from self-exile.

US State Department spokeswoman Heather Nauert said Washington would expand its restrictions on granting visas to include Cambodians "responsible for the most notable anti-democratic actions taken in the run-up to the flawed July 29 election".

Nauert said Wednesday the visa sanctions would apply to people in and outside the government as well as their immediate family members in some cases.

The CPP pointed to 83 percent voter turnout as evidence that a boycott by the opposition failed, but allegations of voter intimidation and some 600,000 spoiled ballots undermined the claims.

Hun Sen has held onto power for decades through a complex mix of development dollars and alliances in the police, army and courts.

The 66-year-old helped bring roads and mega-malls to a country ravaged by decades of civil war and the Khmer Rouge regime, which killed a quarter of the Cambodian population from 1975 to 1979.

A former commander in the group, he defected and was installed as prime minister in 1985 at the age of 32, later presenting himself as saviour while warning of conflict if his regime falls.

The message has resonated with segments of society.

"I don't care about having a one-party parliament. What I want is calm after the election," a tuk-tuk driver named Nhem Ry told AFP ahead of the results.

"We had demonstrations during previous elections which I do not like."

Western governments pulled funding for the vote and condemned it as not credible, but China, which has showered the country with loans and stayed silent on human rights issues, maintained support.

The CPP has long dominated Cambodia but the CNRP, which was founded in 2012, capitalised on discontent with corruption and inequality.

Analysts say the threat to Hun Sen prompted a rewind of democratic freedoms as civil society, NGOs and the press were squeezed in the run-up to this year's ballot.

Sam Rainsy, a co-founder of the CNRP, said in a statement after the official results were released that the election was "fake" and compared the victory to polls in communist and authoritarian states.

John Cavanaugh, who was serving as Cambodia country director for the National Democratic Institute when Hun Sen expelled the group during the sweeping crackdown last year, told AFP that hardline regimes often get tough on dissent before voting.

"But rarely to the degree and with the focused intensity... (of) the Cambodian government's methodical campaign to entirely shut-down the space for true democratic participation, and unfortunately move the country towards outright dictatorship."