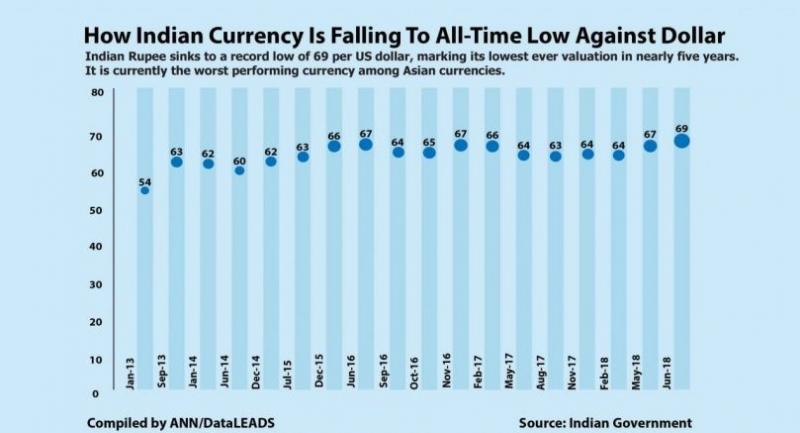 How Indian currency is falling to all-time low against dollar

India’s currency has been among the hardest hit in Asia from the on-going financial crises in Turkey.

The rupee hit a fresh record low of 70.32 against the US dollar in early trade on Thursday. This is Indian currency’s sharpest fall ever amid worries that Turkey’s growing financial crisis could spread to other Asian economies as well.

Financial analysts believe that if the US’s protectionist measures against countries such as China and Turkey, persist, the rupee may fall further against the dollar.

India’s Economic Affairs Secretary Subhash Chander Garg told reporters in Delhi that there was “nothing at this stage to worry” about after the rupee reached 70.1 to the dollar earlier in the day. He said the dip resulted from “external factors.” He said the country had sufficient foreign exchange reserves to weather the downturn.

The economic conditions in India are relatively stable with India having $409 billion in foreign exchange reserves. However the rupee's performance against the dollar in tandem with rising oil prices will increase India's import bill, according to strategic forecasting firm, Stratfor.

Since India imports about 80% of its oil needs, it needs to spend more dollars to procure oil. [This will] lead to debt outflows and compel the Reserve Bank to embark on its own phase of monetary tightening while Prime Minister Narendra Modi's populist spending in support of his 2019 re-election bid is expanding the country's fiscal deficit.”

The falling value of currency, lack of jobs and low foreign investment is a bad news for Prime Minister Modi who is all set to start campaigning for the 2019 general elections. However, fall of Indian rupee is good news for some Indian exporters such as software companies. They stand to benefit from a weak rupee as they get more rupees while converting their dollar export earnings into Indian currency.