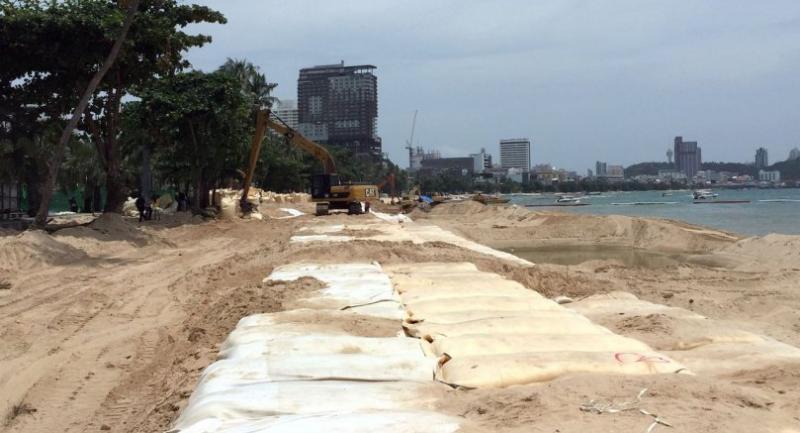 More than 360,000 cubic metres of sand are currently being dredged from the sea bottom and will be added to Pattaya Beach, in a Marine Department project designed to both improve the beach and mitigate coastal erosion.
In only three decades, erosion has transformed the once long and beautiful beach into a thin strip of sand between the sea and the seaside road.

The project aims to restore sand along the entire 2.7-kilometre beach, and widen it from 3.4 metres pre-reconstruction to its original 35-metre width. The move will reclaim up to 59 rai (9.4 hectares) from the sea on a budget of Bt420 million, said Thanawat.
“We will refill the beach by dredging the sand from its source on the sea floor, which is around 20 kilometres away from Pattaya Bay, near Koh Rang Kwain Island,” he said.
“We chose the sand from this source not only because the quality, colour, and size of sand grains here are similar to the sand on Pattaya Beach, but also because there are more than 3 million cubic metres of sand from this site for future usage.”

Before the new sand is moved onto the beach, large sandbags will be buried in the ground to form a foundation and barrier against the eroding tide, he explained. That way, the new sand will not be easily washed away by wave action. During the reconstruction phase itself, a sediment curtain will be placed in the sea to prevent environmental impacts to the marine ecosystem.
The project cannot permanently prevent coastal erosion, he conceded, and he expects the new beach will erode by up to 10 metres during its first year. The major cause of beach erosion is the changing ocean tide, Thanawat said, but he was sure that after three years the erosion rate will decline and the remaining beach will be stabilised.
“I admit that this project is not totally free from environmental impacts and is more expensive than other coastal erosion prevention techniques,” he said, “but this method will provide a larger profit than what we have invested. I expect that Pattaya Beach’s beautification will boost the tourism business, bring 1.7 million more tourists to Pattaya and generate many jobs and incomes for the local people.”
Thanawat’s approach draws praise from Chot Trachu, an adviser to the National Strategy Committee on Environmentally Friendly Development. This project is different from other sand refilling projects, said Chot, as it was properly studied before the project implementation.

Chot is looking forward to seeing the final outcome when the project is completed this November.
“I see that this is the most appropriate coastal protection project compared to a defensive seawall made from concrete structures, which does more harm to the beach than good,” said Chot. “But I also want to suggest that there should be regular monitoring of the beach after the project completion to detect any adverse impacts and mitigate them.”