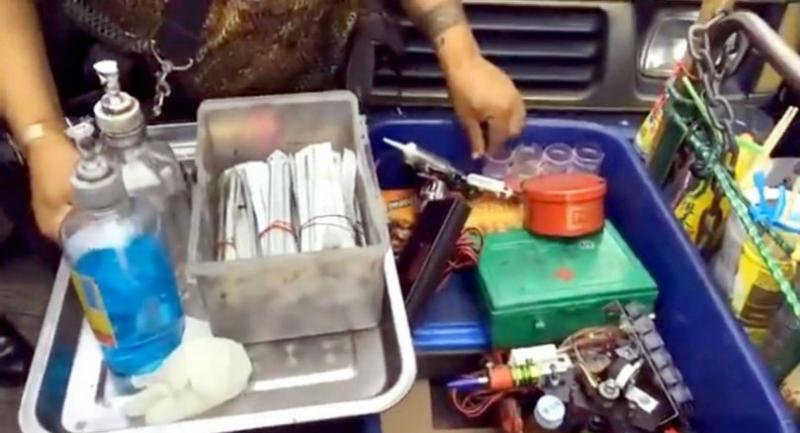 Crackdown on tattoo shops after death of four women

BANGKOK governor Pol General Aswin Kwanmuang has instructed officials and related agencies to inspect tattoo shops at markets, following the shocking report that four female friends recently died of AIDS-related illnesses after having tattoos together at Klong Lot market near the Grand Palace in March.

Aswin was speaking on Monday as officials from the Bangkok Metropolitan Administration (BMA)Department of Health and Phra Nakhon District Office checked the motorcycle-attached stall in question and found it did not meet the required standards of hygiene.
The 50-year-old father of one of the women, Som (not her real name), aged 22, had earlier told reporters he suspected that his daughter might have contracted HIV from a dirty tattoo needle. His story is in itself contentious, however, because the death certificate he showed reporters states that she had been HIV-positive for more than one year.

The tattoo shop owner, Somchai Ariya, insisted he used a new, clean needle on every customer. He admitted he was the person who had tattooed the four women but said he had never had a problem with any customer in the 10 years he had been providing the service.
BMA AIDS, TB and STD Control Division head Dr Alisara Tattakorn said the mobile stall’s initial probe found his stall to be unsafe, failing to meet hygienic standards and posing risks of blood infection.
She said Somchai had been told to suspend his service temporarily and to soon undergo training to keep all his tools clean before resuming the business. BMA Factory and Health-affected Establishment Sanitation Division head Surasit Leungrungkiat said the BMA had no formal information about such tattoo stalls which had mushroomed at various markets and communities.
He said the city only had information about 50 properly-registered tattoo shops, 15 of which were in Phra Nakhon district. He said the BMA would have to confirm the exact number of such tattoo stalls and summon service providers for training about hygiene.
The regulations state that tattoos must first obtain a health-affected establishment licence from a district office. Premises are required to have first aid in place, evidence of proper disposal of infected items, including needles, and evidence that inks used are made for such purpose and are not harmful to health. They also need to display a clearly visible sign to advise customers, clear separation between the tattoo area and the tool disinfecting section from the rest of the shop and must obtain a signed letter of consent from each customer before undergoing the tattoo procedure.
During the Sunday cremation of Som at a Loei temple, her father quoted Som as telling him that she and three workmates contracted HIV when they had their legs tattooed in March, after which her three friends had all died of AIDS.
Despite the morgue’s report that Som’s death was from Hypovolemic Shock and acute diarrhoea that she had had for 14 days and the HIV virus that she had had for one year, the father insisted it was unlikely she had HIV before having the tattoo. He said he didn't want to press any charges against the tattoo shop as his daughter was already resting in peace.
Som’s older sister agreed with their father, saying that Som’s boyfriend didn’t have the virus and that Som and her three deceased friends worked together as food servers only.
HIV infection advances in three stages: (1) acute HIV infection which mostly feels like a flu about 1-4 weeks after the infection, (2) chronic HIV infection that may last for up to 10 years, and (3) acquired immunodeficiency syndrome (AIDS), for which there is still no cure.