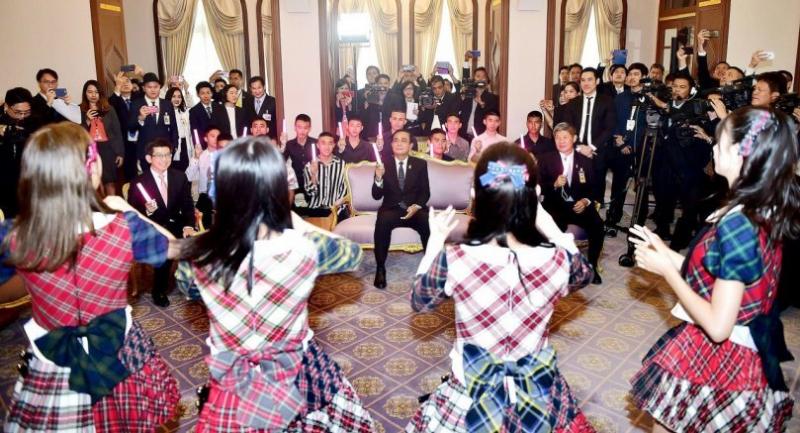 PRIME MINISTER Prayut Chan-o-cha became ota (a big fan in Japanese) for AKB 48 yesterday as the J-pop idol girl band put on a special performance for him at Government House. Yet observers saw a hidden political message in the event.

The band was in Bangkok to promote their year-end concert.
Many fans waited to greet their idols and the whole meet-up was broadcast live on the government’s Facebook page. In the broadcast, General Prayut was seen waving his light stick in time as six members of the AKB48 members – Nanami Asai, Chiba Erii, Iwatate Saho, Mogi Shinobu, Nakanishi Chiyori and Sasaki Yukari – performed their famous single “Koi Suru Fortune Cookies”. Later the PM shook the girls’ hands and took a selfie with them.

Short for Akihabara48, AKB48 has a Bangkok-based sister idol group called BNK48. Debuting in 2016, BNK48 became wildly popular among Thai teens, releasing a Thai version of “Koi Suru Fortune Cookies” last year. This single has had more than 148 million views on YouTube – twice the Thai population.
Prayut said he was excited that the J-pop band is coming to perform in Thailand, but added that he couldn’t attend the concert. “I can’t squeeze through the young fans,” he said, though he promised to follow the band closely on media.
In his conversation with the young band, he also referred to the long-standing bilateral ties, his favourite Japanese dishes and also expressed his sympathy for the natural disasters that hit Japan recently.

The meet-up yesterday took place not long after Prayut invited Cherprang Areekul, lead singer of BNK48, to receive a prize after she agreed to host an episode of the pro-government “Thailand Moves Forward” TV show.

However, academics see a political agenda behind this.
Asst Prof Dr Wilaiwan Jongwilaikasem, a lecturer with Thammasat’s Faculty of Journalism and Mass Communication, said this was part of the PM’s move to expand his fan base to include young, urban teenagers ahead of next year’s elections.
“The prime minister is using these idols to gain votes from their fans,” she said.
The AKB48 and BNK48 fan base is comprised mostly of “young, urban males and females who use Facebook on a daily basis”, she added, pointing out that the Facebook Live clip had won over 2,300 reactions and 189,000 views.
The idols’ fans are not interested in politics and have not chosen to vote for any particular party, unlike the grassroots masses consider campaigns that benefit them, she pointed out. Many of the young urban generation may cast their votes based on their emotions, she added.
Khemmakorn Chatupumdecha, a university student and an ardent fan of AKB48, told The Nation that he was happy the J-pop culture is getting accepted in Thailand.
“I think it’s a good thing that older people like the PM are ready to accept idol culture,” he said.
On the other hand, a 24-year-old fan, who asked not to be named, said she didn’t want her favourite idol, Cherprang, to be pulled into politics, but doesn’t believe this would affect her or other fans’ decision on who they will vote for.
“This doesn’t make me want to support the PM, but I can’t speak for others,” she said. “Maybe younger fans are more likely to be persuaded.”