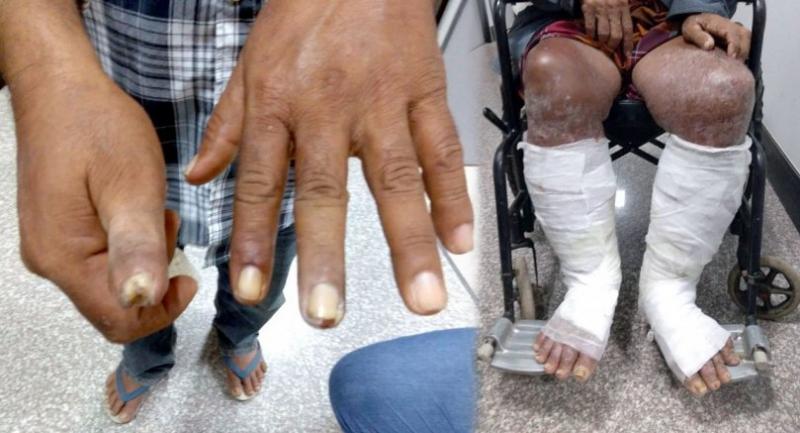 TRACES OF toxic chemicals have been found in the blood of five out of every 100 farmers in Nakhon Ratchasima’s Bua Yai district, if results from tests across 132 villages are used as an indicator.

The Bua Yai district’s public-health office arranged blood tests yesterday after learning that local farmers had been using pesticides heavily recently.
“There are many contamination cases,” the district’s public-health office chief Pongpipat Chumseeda said.
Hence, he said, farmers should protect themselves by properly following instructions on the packages and wearing protective gear.
“They should also get rid of packages properly after using the chemicals,” he added.

He also advised people to wash vegetables several times, and eat detoxifying herbs such as laurel clockvine.
Several farmers have visited Maharat Nakhon Ratchasima Hospital since late last month, seeking treatment for exposure to farm chemicals.
A 50-year-old patient from Bua Lai district had to have his fingers amputated to prevent necrotising fasciitis (a flesh-eating disease) from spreading.
In another case, doctors found severe blood poisoning in a 68-year-old farmer from Chok Chai district. “I developed several health problems since I started using chemicals in my farm five years ago,” the farmer said.

A patient displays wounds on both legs that are the result of exposure to toxic farm chemicals.
The dangers posed by farm chemicals began making the headlines after the Public Health Ministry recommended a ban on some widely used farm chemicals such as paraquat in 2017. Many recent studies have suggested that these farm chemicals are a threat to the environment and people’s health.
Last month, researchers from Naresuan University found high concentrations of four herbicides in soil, vegetables and even the tap water in Nong Bua Lamphu province.