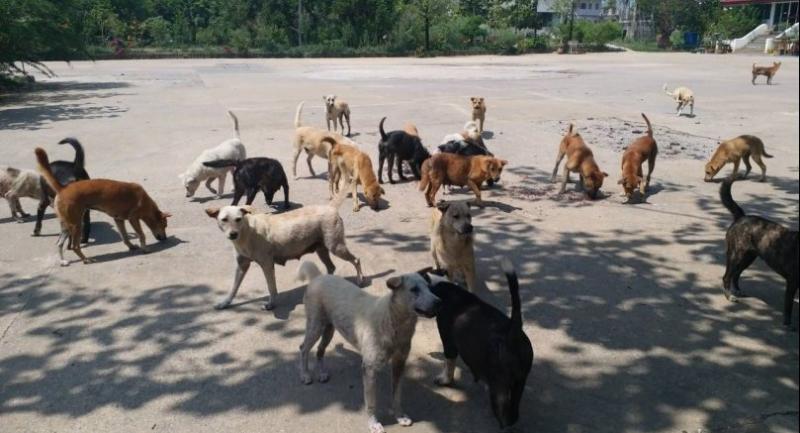 Two million stray cats and dogs by 2027 if no action taken to register and sterilise, forum told

Stray dogs and cats must be registered and sterilised, otherwise their population will reach 2 million in 10 years, the Livestock Development Department has warned.

The number of stray cats and dogs was estimated at 820,000 last year, and the total will reach 2 million by 2027 and 5 million in 20 years if nothing is done, Livestock Development Department deputy director-general Somchuan Ratanamungklanon said during a panel discussion held by Chulalongkorn University’s Faculty of Veterinary Science on Tuesday.
The forum was held to discuss the hotly disputed pet registration bill, which if passed would make it mandatory to register cats and dogs, in order to encourage responsible ownership.
The draft law has been opposed by many who think the registration fee of Bt450 per animal is too high.

The Livestock Development Department promised to reconsider the fee, including waiving fees for a few years after the law is passed.
“We will also consider waiving fees for those who have sterilised their pets,” Somchuan said. He promised that the registration fees would not be a burden, but reiterated the importance of licensing pets and putting strays in shelters instead of letting them roam the streets and reproduce at will.
“Stray dogs often cause danger and can spread diseases like rabies, and their poo is unsanitary and can spread diseases related to parasites,” the deputy agency chief added.
According to the Information Centre for Emerging Infectious Diseases at Chulalongkorn University, 40 per cent of stray dogs also carry the rabies virus.
The panellists, including Livestock Development Department officials, top veterinary professors and a senior news editor, agreed that the pet registration law was necessary to curb the population of stray dogs and cats.
Registration and reproduction control are a sustainable way to reduce the number of strays, said Prof Dr Roongroje Thanawongsuwech, dean of Chulalongkorn’s Faculty of Veterinary Science.

Not only does sterilisation control their population, it actually makes pet less likely to develop breast and prostate cancers and makes them less aggressive, he explained.
The dean proposed that the government should waive registration fees for a few years, and help reduce the cost for people to get their pets neutered and spayed.
He also proposed that vets should get a tax reduction if they help sterilised animals.
However, some questions remain about the government’s ability to shelter such a large number of unwanted cats and dogs.
According to Theerawut Suwathanachou, a senior veterinarian at the Livestock Development Department, right now there are only 10 government shelters and 84 private shelters nationwide.
There are also about 40 temples registered as dog shelters.
The pet registration bill is now being reviewed by the Livestock Development Department and will be forwarded to the Council of the State, the Cabinet and the National Legislative Assembly before it is enforced.
Chalermchai Yodmalai, the editor of Naewna newspaper and one of the panellists, said he hoped the law would be passed before the general election.
“Most people do not oppose the registration per se, but they are not happy with the fees,” he said.
People online have been discussing the costly registration fees.
Many believe that the fees could make many owners abandon their cats and dogs, and that unwanted puppies and kittens would also be less likely to find a home.