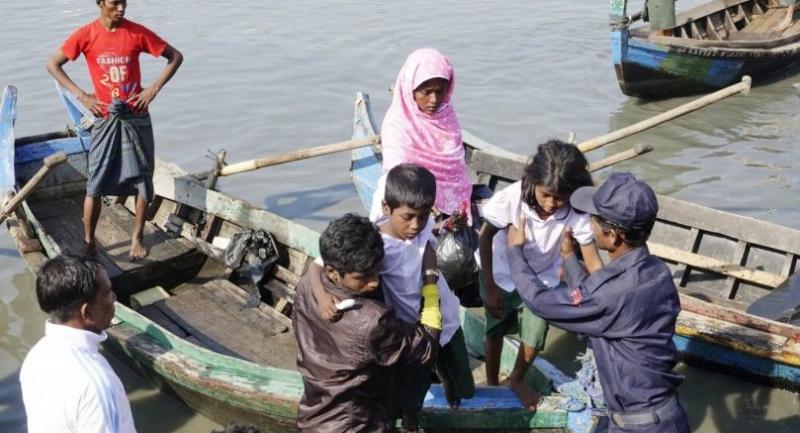 Fears of boat exodus as smugglers prey on Rohingya desperation

As desperation swells in the squalid camps that are home to a million Rohingya refugees, long-dormant -- and often deadly -- trafficking networks are being revived, Bangladeshi officials warn.

Smugglers operating rickety fishing boats prey on the hopes of people who fled violence in Myanmar, charging them small fortunes for a dangerous journey to Southeast Asia, offering an empty promise of a fresh start.

The first vessel to depart Bangladesh for Malaysia since the end of the monsoon was intercepted by law enforcement, who warn others will follow.

Many in the heaving Rohingya ghettos of Cox's Bazar feel they have no other option but to try to escape, community leaders and aid workers say.

A deal to safely return the persecuted Muslims to Myanmar has failed, condemning them to limbo and deprivation in fetid camps where they are barred from leaving or looking for work to improve their lot.

Sensing a surge, coastguard patrols have been stepped up since the first boat was detected in November in the Bay of Bengal, said Ikbal Hossain, deputy police chief in Cox's Bazar.

Another boatload of refugees who fled a camp in Myanmar were found off the country's southern coast in November after spending 15 days at sea in a failed attempt to reach Malaysia.

"As the sea turns calm, the smuggling rackets have resumed their activities. But we have a zero tolerance attitude toward human trafficking," Hossain told AFP.

But he said traffickers were difficult to detect in the teeming hills where more than 720,000 Rohingya sought refuge after a brutal crackdown by the Myanmar military in August 2017.

Shabeda Begum, a 30-year-old widowed in what UN investigators called ethnic cleansing, said she was approached by another refugee offering to reunite her with a sister and brother-in-law in Malaysia.

The Muslim-majority nation hosts one of the largest overseas Rohingya communities, many of whom arrived by boat from Cox's Bazar until that smuggling pipeline was closed in 2015.

Begum was introduced to a Bangladeshi handler in the coastal town of Teknaf and arranged to get the required $120 from family in Kuala Lumpur.

That secured Begum and her two children a spot aboard the crescent-shaped fishing boat crammed with 33 other refugees above and below deck.

"They promised my life would change if I could reach there with my kids," she told AFP despairingly from a plastic-roofed shanty.

Her son, seven-year-old Mohammad Riaz, recounted his terror as the creaking boat was tossed about in the churning sea.

"I was scared because the boat was bouncing on the waves. I thought I would fall overboard and into the sea," he told AFP.

Six traffickers were arrested in connection with the failed voyage, police said.

One told AFP the fishing trawler had been due to transfer the Rohingya to a bigger Malaysia-bound ship out at sea.

At its peak, transnational smuggling networks passed refugees from boat to boat before docking in Thailand and moving them overland to secret campsites in Malaysia.

That route collapsed in May 2015, when shallow graves were found at migrant holding camps along the Thai-Malaysia border.

As authorities closed in, traffickers abandoned boats in the Andaman Sea, leaving starving and dehydrated passengers to drift south.

No one knows exactly how many died in the transit camps or at sea.

Local authorities fear another exodus is looming, as traffickers return to old tricks to lure vulnerable refugees onto ships.

Mosammat Khadiza, a 16-year-old refugee, said her mother put her on board after traffickers promised that a wealthy Rohingya man in Malaysia would marry her.

"We were kept in a fish refrigerator inside the boat's hull for hours. We couldn't move inside the tight space," she told AFP.

The UN refugee agency UNHCR is running awareness campaigns in the camps about the dangers of trusting people smugglers and taking flimsy boats into the open ocean.

"We recognise that the continued maritime movements, despite the serious dangers, illustrate the desperation that people feel," UNHCR spokeswoman Caroline Gluck told AFP.

"Unless they believe there are other tangible solutions to their plight, Rohingya will continue to risk their lives on boats."

But amid grinding hardship, with little prospect of a brighter future, camp leaders say the promise of a better life elsewhere would be difficult to counter.

"This is not a life anyone would prefer," said Rohingya community leader Mohammad Osman.

"That's why they jump on boats without a second thought when approached by traffickers."

Despite her first setback, Begum has vowed to try again.

"I will look out for another chance. My brother-in-law promised to take care of us if we could only reach Malaysia," she said.