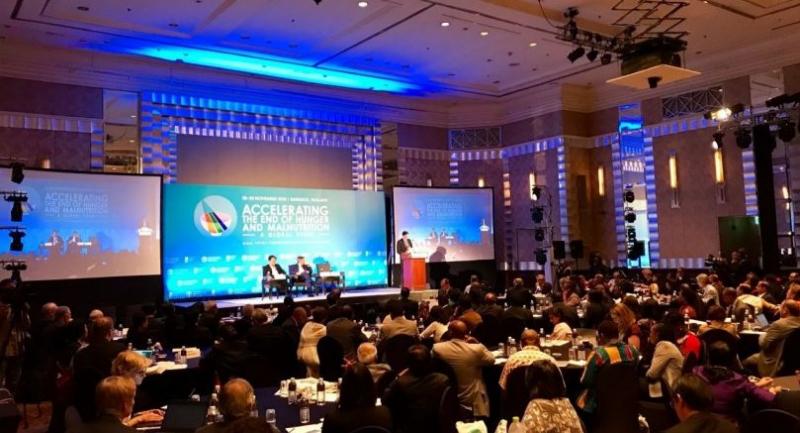 With rising levels of global hunger jeopardising the goal of ending malnutrition by 2030, the United Nations Food and Agriculture Organisation (FAO) and the International Food Policy Research Institute (IFPRI) are hosting a conference in Bangkok aimed at urgently accelerating efforts to achieve Zero Hunger.

After decades of impressive reductions in the numbers of undernourished people, hunger is again on the march. According to the latest report published jointly by FAO and four other UN agencies, 820 million people are malnourished.
“This is the third consecutive year that progress in ending hunger has stalled and now has actually increased,” said FAO Director-General José Graziano da Silva. “Child stunting is a major problem and nearly two billion still suffer from hidden hunger or a deficiency of important nutrients. This also includes people who are overweight or obese.”
While there are big challenges in reaching Zero Hunger, FAO and IFPRI are stressing that the goal is still achievable, said Shenggen Fan, IFPRI Director General.
“Many countries – from China, to Ethiopia, to Bangladesh to Brazil – have achieved remarkable reductions in hunger and malnutrition, and those successes hold important lessons for the places currently struggling to make significant progress.”
The conference, attracting delegates primarily from Africa and Asia is providing a platform to accelerate the sharing of existing knowledge and tools.
While Africa continues to be the hungriest continent per capita, the Asia-Pacific region has the highest total number of undernourished – more than 500 million by FAO estimates.
The region is home to more than 60 per cent of the world’s undernourished, and in order for it to achieve Zero Hunger by 2030, countries need to collectively lift more than 110 000 people out of hunger each and every day for the next 12 years.
Good public policy and knowledge are essential. At the conference, which continues through November 30, strides made in many countries, rapidly and sustainably, will be highlighted.
Bangladesh, for example, has achieved one of the fastest reductions in child underweight and stunting in history, largely by using innovative public policies to improve agriculture and nutrition. Policies supporting agricultural growth helped increase production, while other policies supported family planning, stronger health services, growing school attendance, greater access to drinking water and sanitation, and women’s empowerment.
Economic growth in China lifted millions out of both hunger and poverty, while Brazil and Ethiopia transformed their food systems and diminished the threat of hunger through targeted investments in agricultural research and development and social protection programmes.
Starting in the mid-1980s and continuing over two decades, crop production in Brazil grew by 77 per cent and that – combined with the country’s Fome Zero programme, established in 2003 to provide beneficiaries a wide range of social services – saw hunger and undernutrition nearly eradicated in just 10 years.
Similarly, Ethiopia’s large-scale investments in agricultural have led to substantial growth in the production of cereals and the availability of food, while the creation of the Productive Safety Net Programme provides food and/or cash to needy households, which are direct for the most needy and conditional on a work requirement for others.
The proliferation of new communications technologies, and ability to harness big data, also offer opportunities to scale up successes significantly to even greater impact.
But innovation extends far beyond apps, drones or farm machinery. Innovation in agriculture can involve using new social, organizational and institutional processes to support farmers and sustainably intensify production.
These can range from building stronger producer self-help groups and extension services, to improving access to markets and credit in pioneering ways, to developing new ways of processing, storage, transport and marketing food.
Innovation can be decidedly “low tech” – for example leaving stands of trees on farms intact to promote soil health and enhance agroecosystem productivity. Innovations in intervention design can boost their potential impact, like when behaviour change communications that encourage the adoption of ideal nutrition and child feeding practices are integrated into social protection programmes to improve household nutrition as well as food consumption.
“We have the tools, and we have the knowledge to eliminate hunger in the next 12 years,” said Fan. “By empowering key actors in policymaking, research, and program implementation with those tools and knowledge, we can reach this goal and help millions of people achieve their full potential.”
“We need to work closely together more than ever, sharing with each other those successful experiences,” Graziano da Silva said.
“If we can accelerate this knowledge exchange, then we can accelerate its implementation and take actions that are more concrete. Hunger and obesity are not simply an individual’s problem. They are public issues. But we also need stronger political will and greater financial commitment to get the job done. Political will is fundamental.”