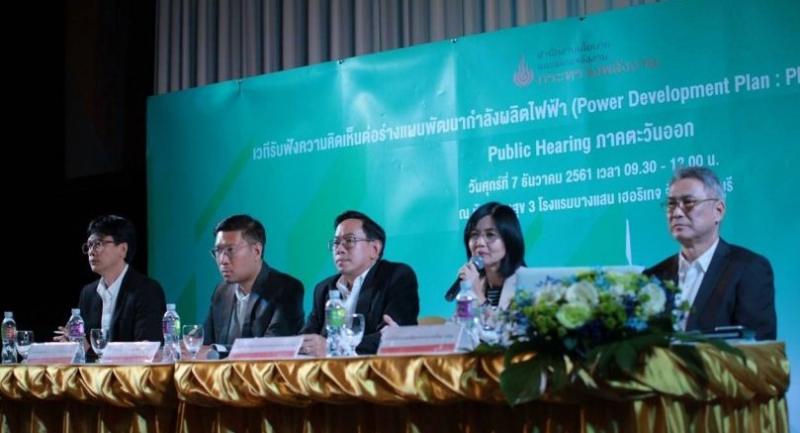 Greenpeace finds little to commend about fossilfueldependent approach to future.

ENVIRONMENTAL watchdog Greenpeace has called Thailand’s Power Development Plan 2018 (PDP) “sugar-coated” despite its embrace of more renewable energy, saying it still hinders efforts to reduce greenhouse-gas emissions.
The Energy Policy and Planning Office (EPPO), which drafted the PDP, affirmed at public hearings last week that it had removed plans for the Krabi and Thepa coal-fired power plants from the document. It said natural gas would remain the primary fuel for power generation, renewable energy would play a 20-per-cent larger role, and more electricity would be derived from private solar-panel rooftops.

Nevertheless, environmentalists remain sceptical, musing about “hidden agendas” within the PDP.
Tara Buakamsri, Thailand director for Greenpeace, said yesterday fossil fuels and other harmful sources of energy – such as waste and hydropower – still dominated the PDP. The approach would not only hinder progress on achieving the Paris Agreement’s goal for stabilising climate change, he said, it would jeopardise sustainable-energy development and “environmental justice”.
“The energy sector is by far the largest greenhouse-gas producer, so the PDP has very strong influence over the country’s efforts to reduce emissions and prevent severe global warming beyond two degrees Celsius,” Tara said.
“But it is now clear that the Thai authorities are not really serious about pursuing Paris Agreement goals, because the PDP contains many serious flaws that will backfire and hurt the global struggle to minimise the impacts of climate change.”

EPPO said the PDP was revised to reflect shifting conditions, in which renewable energy, especially solar photovoltaic (PV) energy, has become much cheaper and more widely accessible to all. Thus, renewable energy’s share of total power sources will be increased to 18 per cent, or 20,757 megawatts, by 2037.
And 10,000 megawatts from renewable energy will be earmarked for the private sector’s solar PV, the agency said.
EPPO deputy secretary-general Wattanapong Kurovat stressed that the PDP’s main objective was to ensure that each region has enough power and stable sources. It was thus important for every region to have its own base-load power plants as reliable sources, he said.
However, because proposals for new coal-fired plants have drawn strong opposition and two such plants listed in the 2015 PDP were shelved, Wattanapong said, natural gas remains the primary fuel for generating electricity. It has a 53-per-cent share of overall power generation in the new PDP, up from 30 per cent previously, while coal’s share has dropped from 23 per cent in 2015 to 12 per cent.
To fill the electricity gap left by cancelling the Krabi and Thepa coal plants, which were expected to generate 870 and 2,200 megawatts respectively by burning imported coal, two 700-megawatt gas-power plants will be built in Surat Thani, he said. These will ensure energy stability for the South.
“With many improvements made in electricity-generation plans for the next 20 years, we are delighted to report that PDP2018 will lower greenhouse-gas emissions compared to the previous plan,” Wattanapong said.
“If this revised PDP is fully implemented, Thailand’s electricity generation sector will only release 103.248 million tonnes of CO2 equivalent by 2036, which is lower than the estimated greenhouse-gas emission under PDP2015 for the same period, of 104.075 million tonnes.”
Tara said that, despite the reduction in coal dependency, Thailand remains overly reliant on natural gas, which also emits significant amounts of greenhouse gases when it’s burned, contributing further to climate change.
“And many people are also suspicious as to whether the Krabi and Thepa plants are truly off the table, because Strategic Environmental Assessments on those projects are still continuing and those findings could be used to revive proposals for the two plants,” he said. Tara also claimed that some of the renewable energy sources and electricity that the PDP envisions being purchased from neighbouring countries are not actually clean or environmentally friendly.

The document includes waste-to-energy plants producing 400 megawatts, for example, which are neither clean nor safe for either the environment or public health. The waste burned to produce energy releases massive amounts of greenhouse gases, Tara said.
“Even buying hydropower from neighbouring countries is not clean or cheap, as the authorities say,” he added, pointing out how dams outside Thailand still cause severe suffering for Thais and the environment here.
“This is why the authorities must make sure that the PDP is consistent with global climate-change-mitigation goals and include genuine public participation.”