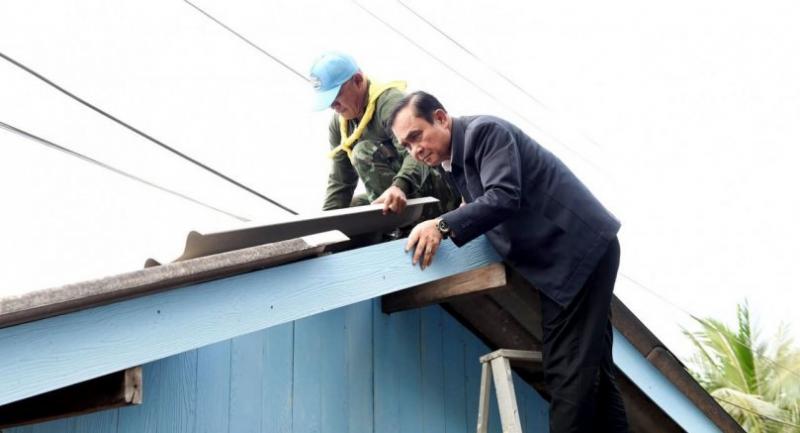 PM VISITS NAKHON SI THAMMARAT, ORDERS REPAIRS TO BE DONE WITHIN ONE MONTH

THE DEATH toll from tropical storm Pabuk has risen to four, while three southern provinces are still reeling from its impact yesterday.
Although the storm has already passed through, the damage and losses it has caused in the South remain highly visible.
Between January 3 and 6, Pabuk killed four people and affected the lives of more than 720,000 in 23 provinces.
“Of these provinces, three – namely Nakhon Si Thammarat, Surat Thani and Chumphon – are still in the disaster phase,” Disaster Prevention and Mitigation Department director-general Chayapol Thitisak said yesterday.
He added that his department was collaborating with relevant agencies in relief operations.
“We will clean up affected places and repair damaged public infrastructure and transport routes,” he said.
Chayapol said efforts for victims would include compensation, which would be awarded in line with Finance Ministry guidelines.
One of the four victims killed by Pabuk was Preecha Jankaew, 69, who died while trying to help storm victims.

Prime Minister General Prayut Chan-o-cha yesterday visited Preecha’s widow in her hometown of Nakhon Si Thammarat, expressing condolences and providing financial help in recognition of his good deeds.
During his visit to the storm-hit province, Prayut also met with many victims and instructed authorities to repair all public facilities within seven days. “Houses damaged by the storm must be repaired within one month,” Prayut said.
He also boarded a boat to deliver relief items to heavily flooded areas along Pak Nakhon Canal in Nakhon Si Thammarat’s Pak Phanang district.
“We have now pooled money to fix a road to our village,” Wandee Janchid, 54, said about locals’ efforts in the wake of the storm. She said locals have put down Bt20,000 to hire a backhoe for road repairs in the hope that they would be able to quickly sell their durian and find food.
“Our supply is running out,” she said.
In Chumphon province, its deputy governor Somporn Patchimpetch said authorities would prepare better measures for evacuating victims after a 91-year-old woman succumbed to a blood infection during the evacuation.
Chalaem Sukpong was bedridden at the time officials knocked on her door last Friday to take her away.
“The evacuation centre was about four kilometres away,” Chalaem’s daughter Sri-ubon Kulalert said. According to her, Chalaem was conscious and able to eat at the time the evacuation began.
“But after she was sheltered along with hundreds of other storm victims, she was unable to sleep – probably because of loud noise or unfamiliarity with the place,” Sri-ubon said.
She said on January 5 that she noticed that her mother’s mouth was full of saliva and that she had fallen unconscious.
“She was rushed to a nearby hospital but in just two hours, she had to be moved to a bigger hospital,” Sri-ubon said. On January 6, Chalaem succumbed to a blood infection caused by pressure ulcers.