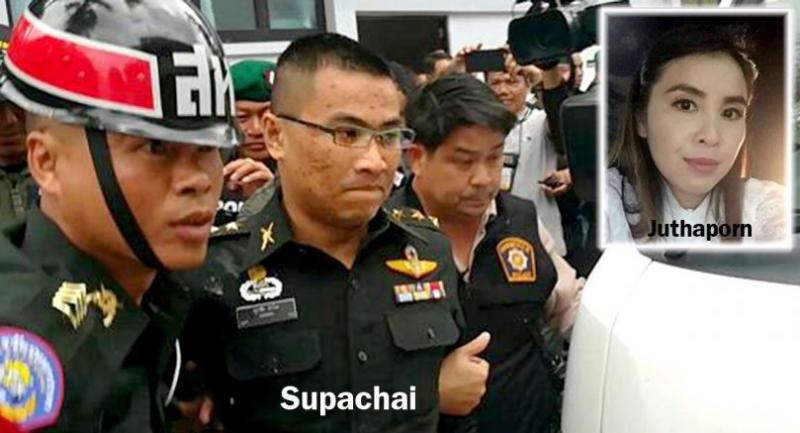 After nearly a year-long court trial, the former army captain Supachai Paso was on Thursday sentenced to death over the abduction and murder of Si Sa Ket-based administration organisation official Juthaporn Oun-on.

He was ordered to pay Bt2.37 million in compensation, plus 7.5 per cent interest until the full payment is made, to the deceased woman's family.
The Kantharalak Provincial Court found the 30-year-old Supachai guilty of criminal charges including the premeditated murder of 37-year-old Juthaporn, illegal detention, destroying the body to conceal the crime, stealing Juthaporn’s car, cell phone, gold ornaments and over Bt10,000 in cash. He also took her ID card, used fake documents and destroyed documents, the court ruled.
The former army officer was also found guilty of fraud by misrepresenting himself as another person and illegally accessing another citizen's computer-based information.
The court, however, dismissed the charges of conspiracy to theft, taking into possession the stolen items and conspiracy to document forgery for the other three defendants in this lawsuit, Suchawadee Pathum-in, Withoon Thaokaew and Pakansawat Khanapan.
Juthaporn disappeared in July 2017.

Police had investigated possible motives for her disappearance, including a dispute over a debt and her relationship with Supachai, who was linked to the case following the police’s discovery on August 8, 2017, of Juthaporn’s Toyota Vios. The car had been resold three times in the interim before it was discovered at an Ubon Ratchathani garage.
An inquiry into the sales and testimony that Juthaporn had told her friend she would collect a debt from an Ubon Ratchathani-based army officer on the day she disappeared led to the questioning of Supachai.

During that time, Juthaporn's relatives, fearing for her safety, joined villagers to search for her body in the forest along the Si Sa Ket border on numerous occasions. Eventually a skull, bones and other items were found in October 2017 in the “Emerald Triangle” forest near the 2305th Paramilitary Ranger base in Ubon Ratchathani’s Nam Yeun district.
The remains and other items were later identified as belonging to Juthaporn.
The court was guarded by 100 police and army personnel on Thursday morning ahead of the court verdict. while Juthaporn's parents Boonlert and Laem Oun-on and other relatives held a picture of their deceased daughter. Supachai, who was brought from the Kantharalak detention centre, arrived at the back of the court building and was swiftly led to the court amid tight security.
Ahead of the verdict, Boonlert, 63, commented that he believed justice would prevail in the case and he called for a death sentence for Supachai. After hearing the verdict, the victim's relatives said they were satisfied and were ready to fight again if Supachai decided to appeal against his sentence.