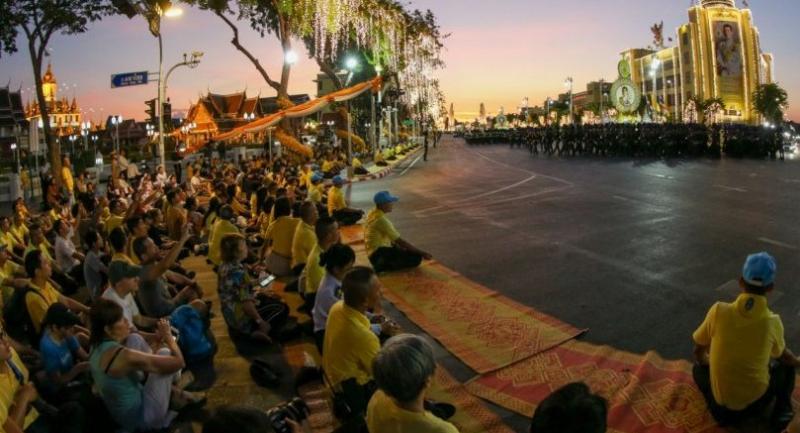 Logistics for the big day

The Transport Ministry is providing free transportation, along with food, water and medical checkups for His Majesty’s loyal subjects

Citizens are invited to be a part of history and line the 7.15-kilometre stretch of road to welcome the royal motorcade during the coronation ceremony of His Majesty King Maha Vajiralongkorn from Saturday to Monday. Nation/Tanachai Pramarnpanich

The royal procession of His Majesty King Maha Vajiralongkorn’s coronation – a once-in-a-lifetime spectacle marked by an elegant and ancient tradition – is an integral part of the rituals that run from Saturday to Monday.

The coronation ceremony is the first of its kind in 69 years, the last one taking place when the monarch’s greatly revered father, His Majesty the late King Bhumibol Adulyadej – who passed away two years ago – formally took the throne in 1950.
Citizens wearing yellow – yellow being the colour associated with Monday, the day of the King’s birth – are invited to be line the 7.15-kilometre stretch to welcome the royal motorcade from Saturday to Monday, Police Strategy Office Commissioner Pol Lt-General Kraiboon Suadsong said.
Forty roads around the Grand Palace will be closed to traffic throughout the coronation period. The roads include Na Phra Lan, Na Phra That, Rajdamnoen Nai Avenue (from the Phan Phipop intersection to the Pom Padet intersection), Rajdamnoen Klang Avenue, Rajdamnoen Nok Avenue (from the Jor Por Ror intersection to the Phan Fah intersection), Sanam Chai, Lak Muang, Phra Chan, Maha Rat and Khao San.

The Transport Ministry is offering free public buses, trains and ferries to the public during the period.
Kraiboon said measures will be put in place from tomorrow through Monday to support the tens of thousands of people who will travel from different parts of Thailand to witness the coronation. He has advised people to present their national ID to gain access to the ceremonial grounds.
Bangkokians will be able to park their cars at the Lat Phrao MRT station, the Courts of Justice complex in Chatuchak, the Office of the Attorney-General, the headquarters of Siam Commercial Bank and Kasetsart University’s Bangkhen campus from where they can board shuttle buses provided by the Transport Ministry.
He said 27 sites have been prepared for up to 40,000 cars coming from the provinces, including at Impact Muang Thong Thai, the Government Complex on Chaeng Wattana Road, Bangkok International Trade & Exhibition Centre (Bitec) Bang Na, the Buddha Monthon Park in Nakhon Pathom and the Central Westgate Mall in Nonthaburi’s Bang Yai district.
Free shuttle buses will also be available at Victory Monument and the National Stadium. The drop-off points will be the Royal Turf Club, Manangkhasila Mansion, Phitsanulok Mansion (the official residence of the prime minister), Wat Debsirin, Memorial Bridge, Somdet Phra Pinklao Bridge and Rama VIII Bridge.
The Metropolitan Rapid Transit (MRT) system will provide free services on Sunday from 6am to midnight on its blue and purple lines. From tomorrow until Monday, the MRT will also provides a free shuttle bus from Hua Lampong, Phetchburi, Lat Phrao and Talad Bang Yai stations for transfer to the ceremony areas.
The Airport Rail Link is also providing free services from 5.30am to midnight on Sunday.
Free parking is available from Saturday to Monday between 5am to 1am.
Mobile toilets will be provided at the sites by the Bangkok Metropolitan Administration. These sites will also include a royally granted mobile kitchen and mobile medical unit, so people can eat and have a health checkup before entering the ceremonial grounds.
People visiting Sanam Luang can enjoy free food from Saturday through Monday, courtesy of His Majesty.

On Monday, the government will separately distribute 80,000 boxes of food, as well as 300,000 bottles of water and 100,000 commemorative pins, all bearing the date and the royal insignia.
The Agriculture and Coopera-tives Ministry will hand out auspicious plants to whoever wants one.
People will also get to peruse an exhibition on the coronation, while a student band will be present to entertain the crowds, Kraiboon said.

Those wishing to stay overnight can do so at the Thai-Japan Bangkok Youth Centre’s Kilawet Gymnasium and Buddha Monthon Park.
Free train rides to Bangkok’s Hua Lampong station will be provided for those travelling from Ayutthaya, Chachoengsao and Nakhon Pathom. The Marine Department is also offering free boat rides from Saturday to Monday between 6am and 10pm. They include four rides on Chao Phya Express from Nonthaburi to Pinklao pier, four from Sathorn to Memorial Bridge pier, as well as free ferries to and from Thon Buri.
Screening checkpoints will be set up at Phan Fah Bridge, the Chalermkrung intersection and the Charoenrat Bridge, while 78 points will be set up to distribute drinking water.