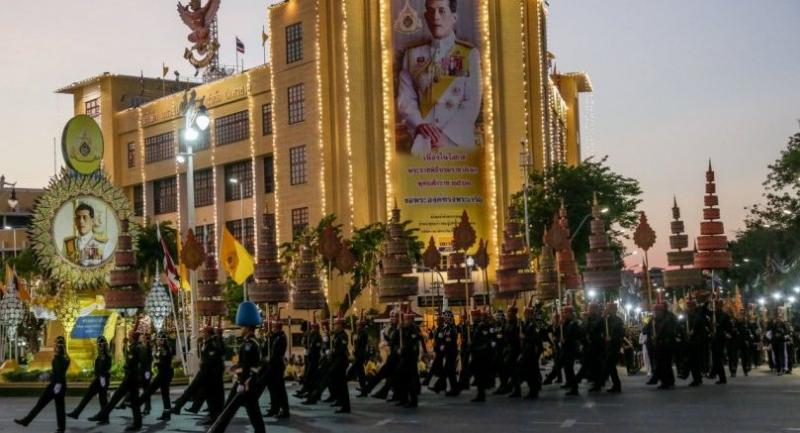 Timeline for an historic weekend

The once-in-a-life-time spectacle that is His Majesty King Maha Vajiralongkorn’s coronation – taking place from Saturday through Monday amid stirring, age-old traditions – is an historic event not to be missed. The formal coronation ceremony takes place on Saturday.

Here is a schedule showing how the weekend’s pageantry will unfold.

SATURDAY
10.09am to noon
The Royal Purification Ceremony – Song Muratha Bhisek in Thai – takes place at the Chakrabat Biman Royal Residence in the Grand Palace. Muratha bhisek refers to the action of pouring holy water over the King’s head, the ablution.
His Majesty will then proceed to the Baisal Daksin Throne Hall for the Anointing Ceremony, and then take his place on the Bhadrapitha Throne beneath the Nine-tiered Umbrella.
The chief Brahmin will present him with the Royal Golden Plaque bearing His Majesty’s official title, the Royal Regalia, the Ancient and Auspicious Orders and the Weapons of Sovereignty.
The crowning and investiture now complete, the King will present his First Royal Command.

2pm
His Majesty grants a grand audience in the Amarindra Vinijaya Throne Hall to members of the Royal Family, the Privy Council and the Cabinet and senior officials bringing their best wishes.

4pm
His Majesty will travel to the Temple of the Emerald Buddha to proclaim himself the Royal Patron of Buddhism.

1.09pm-8.30pm
In the meantime the formal Assumption of the Royal Residence has begun at the Chakrabat Biman Royal Residence within the Grand Palace and continues into the evening. Although His Majesty will by custom spend at least one night there, the ceremony is a chiefly a symbolic occupation of the royal residence and a form of housewarming.

SUNDAY
9am
The King will be bestowed his Royal Cypher and Royal Title in the Amarindra Vinijaya Throne Hall of the Grand Palace and will then grant official ranks to members of the Royal Family.

4.30pm
His Majesty, atop the Royal Palanquin, will be carried in procession to “encircle” the old city, affording people an opportunity to pay homage. The route will be specially illuminated after dusk. The entire procession is expected to last more than five hours.

From the Abhorn Bimok Pavilion at the Grand Palace through the Vises Jayasri Gate onto Na Phra Lan Road
Left on Rajdamnoen Nai Road, right on Rajdamnoen Klang Road and left on Tanao Road to Wat Bovoranives, where the King will disembark to pay homage to the temple’s main Buddha statue
Along Phra Sumen Road, right on Rajdamnoen Road, through the Rattanakosin Exhibition Hall, left on Atsadang Road and along Bamrung Mueang Road to Wat Rajabopidh near the Giant Swing, where His Majesty will again pay respects
Along Fueang Nakhon Road and right on Charoen Krung Road to Wat Phra Chetuphon (Wat Pho), where the central Buddha image will be paid homage
Along Thai Wang Road to the Grand Palace, re-entering through the Vises Jayasri Gate

Monday
4.30pm
The King will make an appearance before dignitaries and the general public on the balcony of the Suddhaisavarya Prasad Hall at the Grand Palace.
5.30pm
The King will grant an audience to foreign diplomats in the Chakri Maha Prasad Throne Hall.