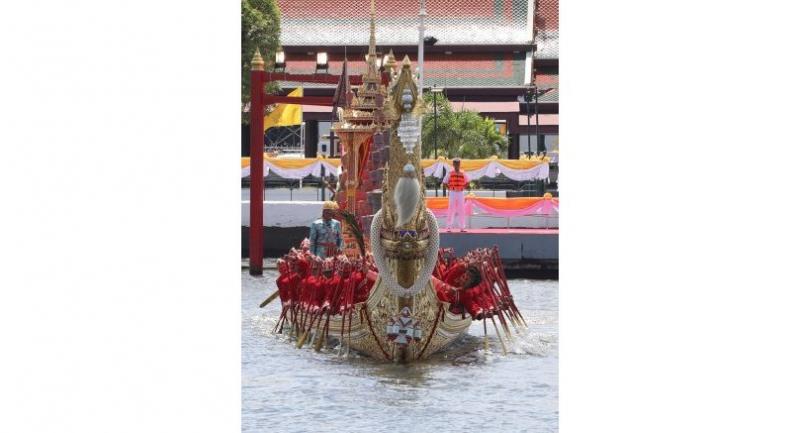 Since 1957, students and teachers of Satri Wat Rakhang School have been creating the exquisite garlands that adorn the royal barges

STANDING OUT from all the other royal barges in this October’s procession on the Chao Phraya will be the Subhannahong. Her name refers to Hong, a swan-like mythical steed of the Hindu god Brahma that appeared in Thai lore during the Ayutthaya Period. Its graceful shape, especially the lean neck inlaid with golden lacquer and supporting an exquisite face suggests the dignity and great honour of being Brahma’s vehicle.

The barge is made out of teak and is the most majestic of all royal barges. Its figurehead is raised in flight with eyes bulging prominently, nostrils flared and fangs protruding from its grimacing mouth.
The head holds a crystal ball and tassel in its mouth and wears a garland and pendant around its neck. Its feathers, represented by gilded and mirrored ornamentation, appear to flow in the wind along the length of its body to its flame-like tail.
As the gilded paddles of the oarsmen flash in the sunlight in rhythm with their stylised rowing, their movement suggests that of gigantic wings and creates the illusion that the barge is in flight through the air.
In April, officials decorated the Subhannahong with garlands, and prepared crews for participation in the coronation ceremony. The Royal Household Bureau installed five-tier and seven-tier umbrellas and drapery as well as a three-prong pennant at the stern.

The garlands decorating the royal barge’s prow were crafted by students and teachers of Satri Wat Rakhang School, specialists in the unique ancient art of floral embroidery.
Traditionally, the garland is a token of welcome, respect and symbolise well wishes to honoured guests, relatives and loved ones.
The floral garlands date back to the reign of King Rama V when they were made popular in the Royal Court by Queen Saovabha Phongsri, (1864-1919), who herself was a master of the craft and introduced the designs we are familiar with today.

The size of garland of the Subhannahong royal barge is very long due to its neckline.

The first component of the garland placed around the neck of the Subhannahong is known as malai and is made of yellow and gold tatar cloth, stuffed with kapok and embroidered with four dahlia flowers. The second component is the star-shaped bouquet, intricately designed with the use of uba – strings of plastic dahlias, hibiscus and galangal flowers tied together to form a long string, which is then attached to the six-pointed star structure.

The making of traditional Thai floral creations is a heritage that continues at Satri Wat Rakhang School, with its teachers and students assigned to craft garlands for the royal barge for the past six decades.

Satri Wat Rakhang School has been crafting garlands for the royal barges since the tradition of the barge procession was revived in May 1957 on the orders of the late King Bhumibol.
The school is marking its 105th year this year, and the teachers and students say they are very proud and honoured to be able to serve the country and the Royal Family.

Students work on the second part of the garland creating beautiful ‘uba’ design.

Pranee Keawchalua, a teacher and expert in the field, said the garland for each royal barge is designed differently based on the features of the barge’s neck.
“The Subhannahong barge’s neck is very long, so we need to create a long garland, while the head of Anekkachatpuchong royal barge is shorter, so the garland is made to match its size.
“The Narai Songsuban HM Rama IX is the grandest, so we create a garland based on traditional patterns. We are all very proud to serve His Majesty King Rama X and be a part of his historic coronation ceremony,” she said.