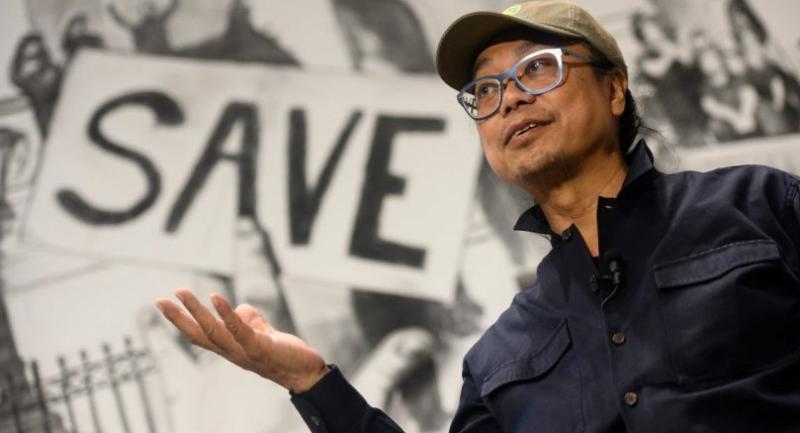 Thai artist dishes out communal curry at US museum

Rich or poor, liberal or conservative, from one corner of the globe to another, we all sit down to share a meal.

Thai artist Rirkrit Tiravanija is betting that this communal experience can break down artificial divides as he serves curry to visitors at the Hirshhorn Museum in an installation that opened Friday.

The feast is part of the art. Visitors fill their bellies with red, yellow and green curries while watching local artists cover the once white gallery walls with photorealistic drawings of protests in Thailand and the United States.

In a 2010 presentation in Bangkok, Tiravanija did the cooking himself with open fires and boiling pots of curry alongside fresh ingredients -- an impossible task in security-minded US museums.

At the Hirshhorn, area restaurant Beau Thai is catering the food.

"It's not every day that we have heating elements -- otherwise known as fire to our fire wardens -- and food," quipped museum director Melissa Chiu.

Even when the daily servings of curry are gone, the spiced fragrances linger, and the installation encourages people to meet, gather and discuss in a joyous cacophony enhanced by the steel flooring in the 150-person capacity room.

Tiravanija, who had participants make friends while washing dishes at the posh Art Basel fair in 2015, is part of a group of artists including Pierre Huyghe, Liam Gillick and Jorge Pardo concerned with "relational aesthetics," whose works are defined by the interaction and collaboration they elicit.

Tiravanija's use of parentheses and lowercase suggests the questions here are more of a "subtext."

The colors in the title of Tiravanija's piece represent the military (green) and the two main factions of anti-government protesters in Thailand at their peak in 2010: the "red shirt" rural farmers and "yellow shirt" royalists.

"For me, it's the irony of the idea of the color," said Tiravanija. "I wanted to show that may be this color or that color but you still eat the same curries, you still live in the same place."

Societies have become more sophisticated and technologically advanced, but, the work recalls, a primal tendency to destroy one another remains.

"We should have a better world now," Tiravanija said. "The terrible thing about it is that it keeps cycling back -- violence or the fear of the other -- and it's being used. It's not just inane, it's manipulation."

Breaking down barriers over a meal may sound utopian, but the murals serve as a reminder of societal frictions that lie just beneath the surface.

They include reproductions of photographs taken from the 2010 Thai political protests and crackdown, the US civil rights movement, the Women's March in Washington and the 1976 Thammasat University massacre, when Thai state forces and paramilitary groups killed dozens of students.

The sketches will be drawn on top of one another in thick layers.

"It will get dense enough that it will cancel itself out. But in that sense, I would like to say, 'don't forget that it is still there,'" the artist said.

"With machines that remember everything for us, we are going to lose our memory much faster than we realize."

The ephemeral experience, which the Hirshhorn has added to its collection and runs through July 24, is participatory, so museumgoers are encouraged to lend their hand to the mural.

To supplement the experience, six films by emerging Thai filmmakers curated by independent director and Palme d'Or winner Apichatpong Weerasethakul are screened in one room, with Tiravanija's feature "Lung Neaw Visits His Neighbors" (2011) in another.

The latter film follows a retired Thai rice farmer living off the land in the bucolic surroundings of his native northern Chiang Mai province at a time when the capital Bangkok was erupting with political unrest.

It begs the question: in such paradisiacal surroundings, what else is needed?