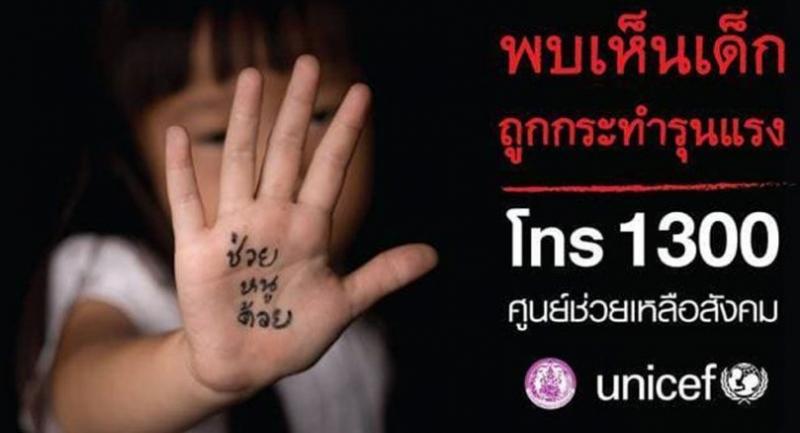 UNICEF, in cooperation with the Social Development and Human Security Ministry, has launched a campaign that urges members of the public to call the 1300 hotline if they suspect child abuse or violence against children.

The campaign, “One Thousand Nightmares can End with Your One Voice”, is aimed at increasing public awareness and encouraging participation in ending violence against children in Thailand.
The 1300 Social Assistance Centre is a 24-hour service run by the ministry to receive reports related to social problems, including child abuse, neglect and exploitation. The call centre locates and connects vulnerable children with appropriate services such as emergency rescue, medical and social service referral, professional counselling and psychosocial support for the child and the family.
According to data collected by the Public Health Ministry from 622 hospitals nationwide, nearly 9,000 children were treated for injuries from physical and sexual abuse in 2017. These cases are likely to be just a tip of the iceberg, as usually only the most severe cases are reported.
At the same time, the National Statistical Office found that in 2015-2016 some 4 per cent of children between one and 14 years old, or up to 470,000 children, had experienced severe physical punishment at home. However, only 1,200 cases a year on average are reported to the 1300 hotline.
“Violence leaves too many children living with nightmares,” Unicef representative Thomas Davin said. “But those nightmares can be stopped if members of the public who suspect or witness child abuse intervene or pick up the phone and report the cases.”
Violence can have a lifelong devastating impact on children’s health and well-being. In addition to physical injuries, violence affects the development of children’s brain, impairs their ability to learn and socialise, and increases their chance of engaging in risky behaviour and perpetrating violence themselves as adults. Children who have suffered from violence are also at a higher risk of mental health disorders, depression, anxiety, self-harm and suicide.
According to Unicef’s global studies, children experience violence across their childhood and in diverse settings, including at home, in school and in their community, where they are meant to learn, socialise and be protected by those who they know and trust. However, many cases of violence and abuse go unreported.
“Violence against children also has long-term impacts on the country’s social and economic prosperity,” stressed Porametee Vimolsiri, permanent secretary of the Social Development and Human Security Ministry. “There must be zero tolerance across society for any form of violence against children – we must not ignore it. One thing that everyone can do to address it is to report when they witness a child being abused, because children often cannot protect themselves or ask for help.”