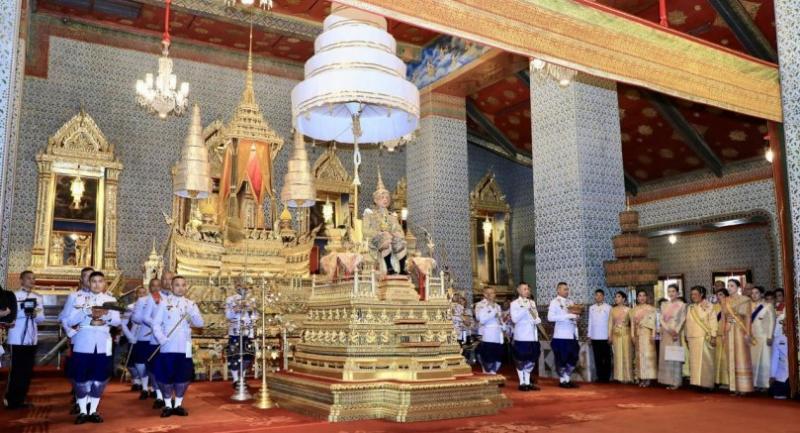 May 4 announced as official holiday to mark Coronation Day

THE CABINET yesterday announced May 4 as the official holiday for Coronation Day.

The holiday marks the day when His Majesty King Maha Vajiralongkorn (King Rama X) was crowned King in elaborate ceremonies held in line with ancient traditions.

The previous Coronation Day was May 5, when the monarch’s late father HM King Bhumibol Adulyadej (King Rama IX) was enthroned in a similar manner.
Assistant Government Spokesman Athisit Chaiyanuwat said the change would give Thailand a total of 19 official holidays.
This includes the recently announced holiday on June 3, to mark the birthday of Her Majesty Queen Suthida.
Meanwhile, the Office of the Prime Minister’s permanent secretary Patcharaporn Intreyonk urged people to embrace harmony and live together peacefully under the blissful protection of the King, after a dispute erupted over a new music video for the national anthem.

She was speaking out of concern that some people might interpret the dispute as a sign of religious divide.
Lately, several Buddhists and groups advocating for Buddhism have insisted that the music video be re-edited to include symbols of the Buddhist faith.
Patcharaporn said the original version showed Cabinet members, civil servants and farmer leaders in front of the Bhakdibodin Building, which features a golden dome, and has led some people to suggest that the new video intended to promote one specific religion and downplay the other faiths embraced by Thais.
“That’s a misunderstanding,” she explained, pointing out that the building was located inside Government House.
Also, Patcharaporn emphasised that the video would be re-edited to include scenes of a Buddhist candle-lit procession around the giant Buddha statue at Buddhist Park on the recent Visakha Bucha Day.
“The new music video will even have pictures of monks collecting morning alms,” she said, adding the new music video would likely be released later this week.