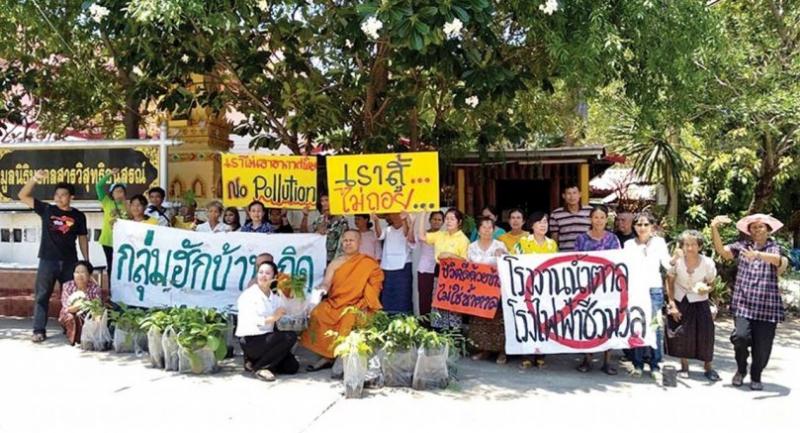 Khon Kaen residents fight against project due to concerns over health and ecology.

PLANNED PUBLIC forums on a project to build a biomass power plant alongside a sugar factory in Khon Kaen province have been postponed indefinitely in the face of growing opposition.
Initially, the forums were to be held from May 21 to 23 in the province’s Non Sila, Ban Phai and Channabot districts, but a consultant is looking to delay them.
“The consulting firm, hired by Mitr Phol Group, has said that it needs more time to promote public understanding of the project,” Panupong Srithananuwat, a core member of the Hak Ban Kerd Group in Ban Phai, said yesterday.
According to him, the letter from the consulting firm reached his group last week.
Since early this year, Hak Ban Kerd Group has been raising awareness among locals of the project’s possible adverse impacts. It has also successfully nudged the Khon Kaen governor into establishing a joint committee to study the project. On the committee are representatives of both the government and people’s sectors.
The group also submitted a complaint with the government about reported intimidation against prominent opponents of the project.
The Cane and Sugar Board’s 10-year strategy (2015–2026) aims to boost the biomass-power production from 1,542 megawatts to 4,000 megawatts. The board has also approved at least 29 projects related to new sugar plants or capacity increases in old plants in the Northeast.
Such industrial projects, however, have raised concerns among locals who fear the associated sugarcane plantations will hurt their environment, given the intense use of agrochemicals in such plantations as is widely known.

In Roi Et province, the Tambon None Sawan Conservation Club yesterday called for the cancellation of a recent public forum on a project to set up a sugar factory and a bagasse-fuelled power plant in their hometown.
If it materialises, the project will be the largest industrial operation in Thung Kula Ronghai area, the basket of one of the world’s most renowned strains of jasmine rice. This area covers 1.27 million rai (203,200 hectares) of land in the provinces of Roi Et, Maha Sarakham, Yasothon, Si Sa Ket and Surin.
Held on May 16, the forum was criticised for paying each participant Bt300.
“Such industrial plants will hurt our local way of life and hurt the reputation of our jasmine rice,” Nupa Kaewpila said, as representative of the Tambon None Sawan Conservation Club.
She submitted a petition of more than 2,000 signatures to deputy Roi Et governor Lertbus Kongthong in support of a call for the forum to be cancelled.
“We also hope the Roi Et governor will cancel the second public forum that is scheduled to take place on May 23,” Nupa added.
As an organic farmer, Nupa said she could not stay still when such a big project threatened the jasmine rice they grow and the local way of life.
She added that she would try to find allies for the cause of protecting the Thung Kula Ronghai rice.
The project, under Banpong Sugar Co Ltd, has reportedly drawn huge opposition from locals.