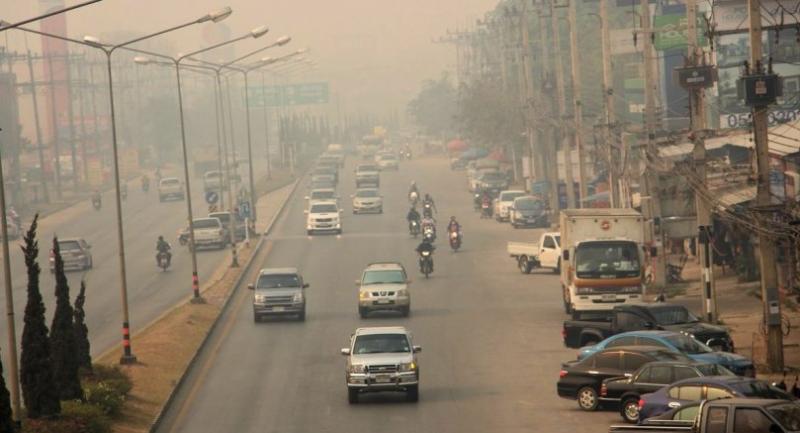 Pollution in Thailand at ‘stable’ level for past five years

THOUGH MILLIONS of people across the world succumb to ailments caused by air pollution every year, Thailand’s situation has been described as “stable in the past five years”. This is despite the fact that pollution in the North was worse than ever this year, officials said yesterday.
As much as 90 per cent of the world’s population lives in highly polluted areas, which contributed to an annual 7 million deaths, Department of Health director-general Dr Panpimol Wipulakorn told the press yesterday ahead of Thai Environmental Health Day marked every year on July 4.
This year, the day will be marked with an event on July 1 and 2 at Miracle Grand Convention Hotel under the theme “Better Air Quality for Better Health”.
Meanwhile, Pollution Control Department (PCD) executive Pansak Thiramongkol said that air pollution in Thailand has been generally stable over the past five years, though the key issues of concern are fine airborne particulate matter 10 microns or less in diameter and the depleting ozone layer.
Air pollution peaked beyond safety levels in the North during the dry season from January to April, he said, adding the situation was worsened further as the El Nino phenomenon pushed the temperatures higher by a couple of degrees and the rate of rainfall dropped by 10 per cent.
To add to this, there were many forest fires sparked by fires set off by farmers to clear their farmland nearby.
Air pollution in Tambon Na Phra Lan in Saraburi province’s Chalerm Phrakiat district was also bad this year because the production of cement and construction contributed to more dust in the air during the dry season.
Meanwhile, the average level of PM2.5, or dust particles that are smaller than 2.5 microns in diameter, in Bangkok and nearby provinces stood at 27 micrograms per cubic metre of air – slightly higher than the World Health Organisation’s safety standard of 25mcg. Pansak put this problem mainly down to traffic jams.

‘Get to the source’
As for similar problems in Bangkok and its vicinity next year, Pansak said the way to deal with that would be to use air-purifying towers, which cost Bt60 million each and can purify 10 million cubic metres of air per day.
This means Bangkok will require at least 16,000 such towers, and this does not include the cost of the land needed to house these towers.
“So, it would be easier and cheaper to just bring the sources of pollution under control,” he added.