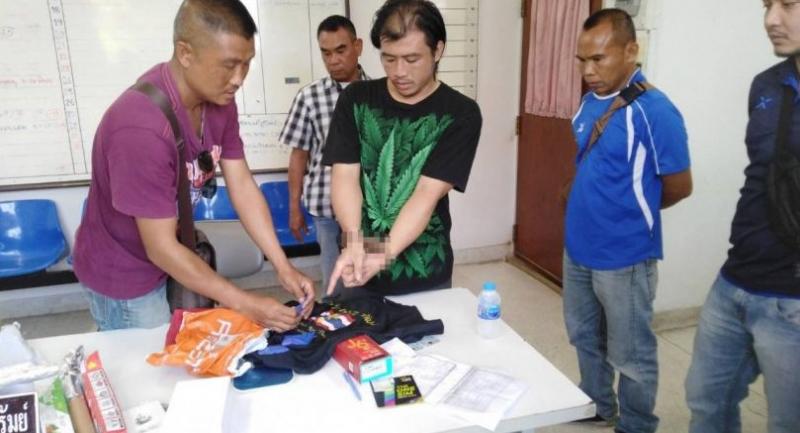 Policeman to be questioned over drugs today

THE ARREST of a drugs courier may prove to be a saving grace for Pol Lt-Colonel Pichet “Inspector Yae” Saoban.

The former drugs crime-buster claims he has been framed by grudge-holding criminals who sent a package full of drugs to his home, leading to his elderly mother being arrested last week.
Phayao man Anusak Mingmuang, 25, who worked as a construction worker for more than a year in the Satuk district of Buri Ram province where the box came from, was arrested in Satuk yesterday afternoon with an unidentified amount of methamphetamine pills and 5-6 Thai ID cards belonging to other people, a police source said.
Anusak is now being accused of sending a package containing 50 grams of crystal meth or “ice” plus 50 ecstasy pills to the policeman’s house by using the ID card of another man, Panomtuan Saewang, as the sender.
Pichet’s 61-year-old mother was arrested on Saturday by officers from Narcotic Suppression Police Region 6, as she was signing to accept the package on his behalf.
The police source said CCTV footage at Satuk Post Office also showed that Anusak had sent a total of six boxes to various destinations.
Police inquiries have shown that, apart from the one intended for Pichet’s house, the five boxes comprised: one containing 180 meth pills and sent to Khon Kaen’s Chum Phae district; one containing 200 meth pills that was sent to Krabi’s Khao Phanom district; one containing 200 meth pills and sent to Ranong’s Muang district; and two other boxes, containing 180 and 200 meth pills, that were sent to Nakhon Si Thammarat’s Muang district and Krabi’s Ao Leuk district respectively.
The source said police had established that the drugs were sent from Phitsanulok province to Anusak for further distribution but declined to make any further comments in case it impacted on the ongoing investigation.
Pichet now works as a tourist police officer in Chiang Mai but has returned on leave to Nakhon Sawan to give evidence to police today. He insists he is the victim of malicious bullies and said his only dispute is with the grudge-holding drugs gang that set him and his mother up, not the police officers who had arrested his mother.
Deputy National Police Commissioner Pol General Chalermkiat Srivorakan said the Provincial Police Region 6 Office had set up a fact-finding committee to investigate whether Pichet had been bullied by the gang as he claimed. Chalermkiat also instructed the Narcotics Suppression Bureau (NSB) to investigate the case and the accused drugs gang in detail.
NSB commissioner Pol Lt-General Chinnapat Sarasin said the investigation by Payuhakhiri police was ongoing and it was not yet known if Pichet had been involved in drug trafficking. He added that the arresting police officers did not know Pichet personally so there was no suggestion they had any motive to bully or frame him.