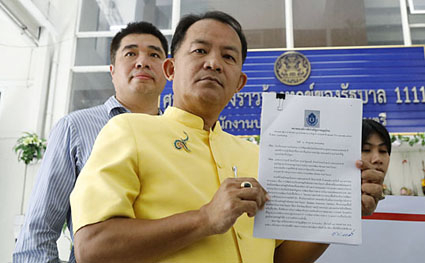 The Election Commission (EC) said on Friday that an application for membership of a political party is an internal matter and need not be instantly updated to the EC’s online database.

Sawaeng Boonmee, secretary general of the EC, was commenting on a complaint filed by a political activist, Srisuwan Janya, against Deputy Prime Minister Prawit Wongsuwan.

Srisuwan had asked the EC to consider taking legal action to dissolve the leading party in the ruling coalition, Phalang Pracharat, because it had allowed itself to be influenced by an outsider by inviting Prawit to attend a seminar involving its MPs in Nakhon Ratchasima over the weekend.

Srisuwan said he had checked with EC’s online database and found that Prawit was not registered as a Phalang Pracharat member.

But Phalang Pracharat argued that Prawit had applied to become a party member on July 19, before attending the seminar.
Sawaeng said the Political Party Act required parties to update their memberships with the EC database every quarter. Sawaeng said the database has been updated to the end of June and since Prawit joined the party on July 19, the update would be done in the third quarter.

Sawaeng said the EC would inquire with Phalang Pracharat about the timing of Prawit’s membership in response to Srisuwan’s complaint.

“But membership changes do not take effect immediately because of the need for the updating in the computer database. The database was set up just to make it convenient for parties to report to the EC,” Sawaeng said.

“In case of any issue, the EC will ask a party to submit evidence of membership. Application for party membership is an internal affair of a party,” Sawaeng said.