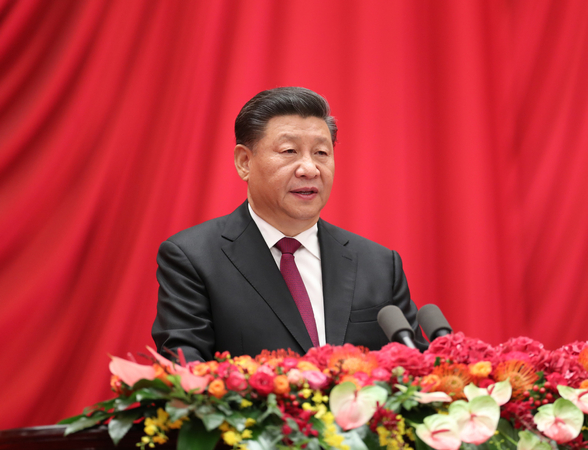 President Xi Jinping called on Chinese people of all ethnicities, both at home and overseas, to unite in pushing forward the fulfillment of national rejuvenation on Monday.

Xi, also general secretary of the Communist Party of China Central Committee and chairman of the Central Military Commission, made the remark in a speech at a grand reception in celebration of National Day at the Great Hall of the People in Beijing.

Unity is iron, steel and strength, and it is the important guarantee for the Chinese people and Chinese nation that they will overcome all challenges and gain one victory after another, he said.

China will continue to act in strict compliance with the Constitution and the basic laws of the two special administrative regions, and to improve the systems and mechanisms for enforcing the basic laws, he added.

With the full support of the motherland and the joint efforts of the compatriots, Hong Kong and Macao will definitely share in common progress with the mainland areas of the country, he said.

Xi reaffirmed China's stance on the Taiwan question, saying that the one-China principle and the 1992 Consensus must be upheld to promote the peaceful development of cross-Straits relations and deepen economic and cultural exchanges with Taiwan.

Xi noted that in the past 70 years, under the firm leadership of the CPC, the Chinese people have made glorious achievements.

The problem of absolute poverty, which has existed for thousands of years in China, will soon be eradicated, and that will be a miracle in the history of mankind, he said.

Xi stressed that China will stay on the path of peaceful development, continue to increase its opening-up and join hands with the people of other countries to build a community with a shared future for mankind.