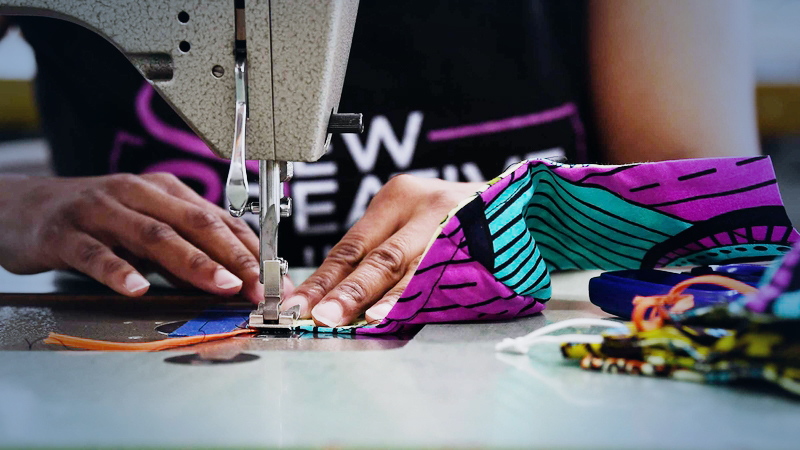 The Centers for Disease Control and Prevention is recommending that Americans wear basic cloth masks in public to prevent spreading the coronavirus, President Donald Trump announced Friday, reversing earlier guidance on the subject as the epidemic continues to balloon across the United States.

The updated recommendation came as the nation saw a new daily high in virus-related deaths - 1,100 - which brought the total American toll from the outbreak to more than 7,000. The number of people with confirmed infections also grew by more than 31,000, increasing the total to more than 273,000 - equivalent to the population of U.S. cities like Toledo, Ohio, and Durham, North Carolina.

Trump said the mask recommendation was "voluntary," and he almost immediately added that he wouldn't follow the guidance: "I don't think I'm going to be doing it." He also said that Americans need not wear medical-grade masks, which should be reserved for health-care workers, and that they should continue to follow the CDC's social distancing guidelines, which call for people to stay at least six feet from others and to not gather in groups.

Health-care workers and state leaders have this week intensified their calls for more masks, as well as gowns, gloves and ventilators needed to treat the ill. Trump on Friday announced that he was invoking the Defense Production Act to prohibit "scarce health and medical supplies," including N95 masks and gloves, from being exported outside the United States "by unscrupulous actors and profiteers."

The move, coupled with other developments Friday, seemed to ramp up America's burgeoning feud with other nations over supplies to treat coronavirus illnesses.

"We need these items immediately for domestic use," Trump said, though he suggested he would not interfere with other countries' existing orders. "We have to have them."

Surgeon General Jerome M. Adams said the CDC issued the new guidance on masks in part because officials had seen more data showing that people without symptoms could spread the virus. There appeared to have been a vigorous debate inside the White House about what to do. As recently as Thursday night, a White House official said the guidance "would be targeted for those in areas of high community transmission," though the recommendation ultimately issued was for all Americans.

New York Gov. Andrew Cuomo said he was signing an executive order that would allow him to deploy the National Guard to redistribute ventilators from hospitals in his state that do not immediately need them to those that are in crisis. Though Cuomo said the ventilators would be returned later or the hospitals would be reimbursed, he conceded that the dramatic step might rankle those reluctant to part with a resource they might one day need. He said the mounting death toll and growing shortage of equipment in parts of New York gave him no choice.

"I'm not going to be in a position where people are dying and we have several hundred ventilators in our own state somewhere else," Cuomo said. "If they want to sue me for borrowing their excess ventilators to save lives, let them sue me."

New York had a particularly difficult Friday, adding nearly 560 people to its covid-19 death toll, bringing the state's total count to more than 2,900. But it was hardly alone. Neighboring New Jersey recorded more than 100 deaths, raising its total to more than 640. Michigan and Louisiana added about 60 deaths each, bringing their respective totals to more than 470 and more than 370.

"This is one of the greatest tragedies to ever hit our state and our nation, indeed, and we must have a constant and visible memorial of the tremendous personal toll covid-19 is having on our communities," said New Jersey Gov. Phil Murphy, who on Friday ordered flags in the state to be flown at half-staff to honor residents who have succumbed to the virus.

In Wisconsin, the governor on Friday called for a special legislative session Saturday to debate canceling in-person voting in Tuesday's primary and extend the deadline for mail-in ballots to late May. Trump criticized that decision and said he was skeptical generally of mail-in voting.

U.S. governors have repeatedly complained that Trump is forcing them to compete against one another to purchase supplies and that the federal government is not sending enough help. U.S. officials have said the national stockpile of medical supplies has been depleted as they ship materials to hospitals, and they are scouring the globe to find more. But their efforts met resistance Friday, as some officials in other countries complained that the United States was being inconsiderate toward its allies.

Canadian Prime Minister Justin Trudeau said Friday that "it would be a mistake" for the United States to stop the Minnesota-based manufacturing giant 3M from exporting N95 respirator masks to Canada, which is similarly scrambling to acquire critical medical equipment as supplies dwindle.

The comments came after 3M said in a news release that the White House had requested that it cease exporting the respirators to Canada and Latin America - an ask that it said could spark retaliation and have "significant humanitarian implications." A day earlier, Trump announced that he had invoked the Korean War-era Defense Production Act to compel 3M to provide more N95 masks for use by medical workers in the United States.

Trudeau said Canadian officials have been "forcefully" pointing out to their American counterparts that trade "goes both ways across the border." Thousands of nurses in Windsor, he noted, travel to Detroit each day to work in hospitals there.

"These are things that Americans rely on," Trudeau said, "and it would be a mistake to create blockages or reduce the amount of back-and-forth trade of essential goods and services, including medical goods, across our border."

In Berlin, a delivery of 200,000 masks ordered and paid for by the city's police department was "confiscated" en route, a city official said Friday, citing the United States as the likely reason for the diversion. The consignment of FFP2 masks from China only made it as far as Bangkok, according to Andreas Geisel, the state minister of the interior of Berlin.

"We consider this an act of modern piracy," Geisel said. "This is not how you deal with trans-Atlantic partners. Even in times of global crisis, Wild West methods shouldn't rule."

The Trump administration has said it has poured millions of masks, gloves and gowns into the supply chain, in addition to helping open temporary hospital facilities in hard-hit areas. The Defense Department said Friday that it has loosened its requirements to allow recovering coronavirus patients to be served at some of its medical facilities.

But Trump also has sought to blame the states, saying they should have done more to increase their own stockpiles before the outbreak. In September 2018, the Trump administration received detailed plans for a new machine designed to churn out millions of protective respirator masks at high speed during a pandemic, but it did not proceed with making the device.

A new ABC-Ipsos poll released Friday found that fewer than half of Americans approve of Trump's management of the coronavirus outbreak.

The poll found that 47 percent approve of the president's handling of the public health crisis, while 52 percent disapprove. Several other recent polls have suggested a bump in approval of Trump's performance, including an ABC-Ipsos survey released March 20 that showed 55 percent approval of his management of the situation.

The latest ABC-Ipsos poll was conducted April 1 and 2, after Trump warned of some "very painful" weeks ahead and the White House released projections that between 100,000 and 240,000 Americans will die as a result of the coronavirus, even if social distancing measures are closely followed.

The U.S. economy is continuing to buckle under the weight of government-imposed stay-at-home orders designed to slow the spread of the virus. According to a Labor Department report, the economy shed 701,000 jobs in March, driving the unemployment rate up to 4.4 percent.

Almost two-thirds of the decline - 459,000 jobs - occurred in the leisure and hospitality sector, mainly in restaurants and bars, according to the report. But government economists said "notable" job cuts also hit several other sectors, including health care, professional and business services, retail trade, and construction.

Wall Street ended another wild week on a low note, with the Dow Jones industrial average sinking 360 points. The Standard & Poor's 500 and Nasdaq composite also ended the day in the red.

House Speaker Nancy Pelosi, D-Calif., pressed the case Friday for another federal stimulus bill that would include more direct payments to individuals, additional small-business loan funding and the extension of enhanced unemployment benefits.

"We don't need a long time to figure out what we do next. We know," Pelosi said during an appearance on CNBC, arguing that the $2.2 trillion stimulus bill Trump signed into law was insufficient to address the growing economic fallout. "Right now, I think that we have a good model. It was bipartisan, it was signed by the president. But it's not enough."

Her exhortations came as Senate Majority Leader Mitch McConnell, R-Ky., has argued that it's "premature" to craft more economic stimulus legislation before the recently enacted measure can make an impact. Pelosi said that the previous legislation was merely a "down payment" and that lawmakers need to do more to put money in the hands of consumers if U.S. businesses are going to survive the coming months.

"If they don't have customers, they're just where they were before," she said.