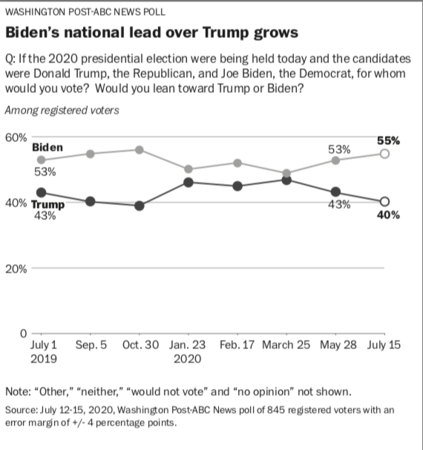 Biden leads by double digits as coronavirus takes a toll on the president, Post-ABC poll finds

President Donald Trump faces a significant challenge in his bid to win reelection in November, with former vice president Joe Biden holding a double-digit lead nationally and the president's approval ratings crumbling amid a spreading coronavirus pandemic and a weakened economy, according to a Washington Post-ABC News poll.

The survey portrays an embattled president whose fortunes have declined markedly since the coronavirus arrived in the United States months ago. Trump's prospects for winning in November appear to depend heavily on his ability to rally an enthusiastic core base of supporters and on convincing a broader swath of a largely skeptical public that he is dealing effectively with the pandemic.

Biden leads Trump 55% to 40% among registered voters. That compares with a 10-point Biden lead in May and a two-point edge in March, at a time when the pandemic was just beginning to spread rapidly in parts of the country. Among those who say they are certain to vote, Biden's lead stands at 11 points.

Despite the president's attempts to shift the electorate's focus to his criticisms of Biden, both candidates' supporters are treating the November election as a referendum on Trump. Among Trump voters, 72% say what is most important is reelecting the president, including 47% who say this is extremely important, while 21% say their motivation is to defeat Biden.

Among Biden voters, the results are roughly the opposite, with 67% saying what is most important is defeating the president, including 48% who say this is extremely important, and 24% saying that electing the former vice president is their main motivation.

National polling results tell only a partial story of the state of the 2020 election. Trump's hopes for a second term rest on whether he can assemble an electoral college majority in the states, even if he were to lose the popular vote, as he did in 2016. Current polling in battleground states shows a similarly challenging pattern for Trump, however, with the president struggling to replicate the often-narrow victories that led to his election four years ago. Still, the margins in many of those states are closer than the national numbers.

Other polls in recent days have also found Trump trailing by a wide margin nationally, and the president responded Wednesday by shaking up his campaign team, demoting campaign manager Brad Parscale and elevating Bill Stepien to the job of leading the reelection effort. To date, however, the president and his campaign have struggled to settle on a consistent and effective line of attack against Biden.

The poll offers a major reason for that: the pandemic that is weighing heavily on the president. The poll was taken as the number of new cases sets records almost daily and the death toll is rising again. What is not predictable is what the situation will be closer to the election and how any changes might affect judgments of Trump's handling of the virus and, therefore, his prospects for reelection.

The current standing between the president and his challenger appears closely tied to overall impressions of how Trump is dealing with the country's major problems. His job approval rating has dropped sharply in the past two months and stands at 39% positive and 57% negative among voting-age adults, with 48% of Americans saying they strongly disapprove of the way he is doing his job. In a late-March poll, when just two points separated Biden and Trump in a head-to-head test, Trump's approval rating stood at 48% positive and 46% negative.

The drop in Trump's overall approval is related to a more precipitous decline in how Americans judge his handling of the coronavirus pandemic. On that question, there has been a net drop of 28 points in his approval margin since March as the president has repeatedly contradicted or ignored health experts in his administration and in the states, stoked confusion about the importance of wearing masks and at times appeared indifferent to the crisis even as conditions in many parts of the country were worsening. Currently, 38% approve of Trump's handling of the pandemic, and 60% disapprove.

The president's one consistent strength over the past few years has been public perceptions of his handling of the economy, especially before the pandemic forced businesses to close and millions of workers to be laid off, sending the unemployment rate soaring into double digits.

Today, despite the country's economic problems, he is still narrowly in positive territory, with 50% of Americans approving of his handling of the economy and 47% disapproving. In late March, he enjoyed a far-more positive rating, with 57% approving and 38% disapproving.

Among voters who approve of how he has handled the coronavirus, 93% support Trump over Biden. But of the far larger group who disapprove of Trump's handing of the pandemic, an almost equal portion, 89%, supports Biden over Trump.

All told, Biden bests Trump on six of seven attributes and on three of four issues measured in the poll.

Biden is seen as having the better personality and temperament to serve as president by 26 points among adults overall. He is seen as likely to do more to unite the country by 24 points, of better understanding "problems of people like you" by 17 points, as more honest and trustworthy by 14 points, as better representing "your own personal values" by 12 points and as having a better idea of what America should stand for by 10 points. Trump and Biden are even at 45% on the question of who is seen as the stronger leader.

Trump's weakness on the issue of uniting the country shows up in two other questions. In the new poll, 61% say the president has done more to divide the country than unite it, and 76% say that when Trump talks about people with whom he disagrees, he crosses the line in terms of what's acceptable, with 21% saying he stays within acceptable bounds. Views of Biden are flipped, with 63% saying he stays within acceptable bounds and 26% saying he crosses the line.

The second two items are notable because the president and his campaign have embraced a law-and-order message, airing television ads that include clips of urban violence and that portray the former vice president as a captive of left-wing radicals bent on tearing down the country. At a time of heightened racial consciousness, Trump has repeatedly used racist appeals to win support.

Trump's best issue remains the economy, where 47% say they trust him more and 45% say they trust Biden more. That represents a drop for Trump from March, when he had an eight-point advantage on economic trust.

The Post-ABC poll finds Trump's recent decline in support is concentrated in states that have averaged at least 30 daily coronavirus cases per 100,000 residents over the past week, a group that includes Florida, Texas, Arizona and Georgia. Trump led by double digits among voters in these states in May, but the latest survey shows Biden with a slight advantage.

When compared with his performance in 2016, the president has lost ground among several key groups of supporters.

The most significant could be Americans over age 65, a group Trump won by seven points, according to network exit polls, but among whom he now narrowly trails Biden, 51% to 46%. That, however, is better than the 10-point deficit among seniors in a Post-ABC poll conducted in May.

He also has lost ground among white women. In 2016, he won white women by nine points and today is at risk of losing the group, with 46% to Biden's 50%.

Overall, Biden leads among all female voters by 60% to 35% and also among all men by a statistically insignificant 49% to 45%. Continuing a pattern, white voters split sharply along educational lines, with voters holding four-year college degrees clearly favoring Biden and those without degrees backing Trump, by similar margins.

About 2 in 3 voters in urban areas back Biden, while not-quite 6 in 10 of those in rural areas back the president. In suburban areas, considered the key battleground this fall, a bare majority currently back Biden.

The coronavirus pandemic has spurred demands for voting options in November, but the poll finds that most Americans say they prefer to vote in person rather than by mail, by 59% to 38%.

Trump has repeatedly attacked voting by mail as subject to fraud, and the new survey shows that slightly more Americans say they think mail-in voting is vulnerable to significant levels of fraud, with 49% agreeing with that statement compared with 43% who say there are adequate protections to prevent significant fraud.